Through unexpected challenges, loss of funding and the chaos from the COVID pandemic, Michael Davis’ vision for a new motion picture was in jeopardy. In fact, Davis, who graduated in 1990 from Cedarville University, was amazed that “ Paul’s Promise” became a reality. 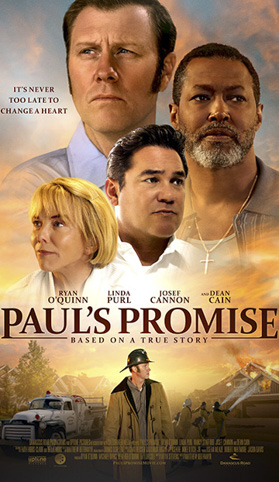 Despite the many setbacks and after nearly three years of hard work, Davis and his team will premiere “Paul’s Promise” in theaters across the country beginning Friday, Oct. 21.

“Paul’s Promise” tells the true story of Paul Holderfield, set during the Civil Rights movement in Little Rock, Arkansas. Through a promise to bring his mother’s prayer list to church, which he made to her as she was dying, Holderfield’s life is ultimately transformed.

Prior to his spiritual transformation, Holderfield was a self-proclaimed racist. He had little time to help others or pursue biblical ideals. By keeping his promise to his mother, however, Holderfield became a Christian and started the nonprofit organization F.L.A.M.E. (Feeding and Loving All Men Equally) through the Friendly Chapel Nazarene Church. Today, this ministry has served the people in Little Rock for over 30 years.

“Paul’s Promise” shares Holderfield’s struggles and journey in the most unlikely ways.

“This film really speaks to our current climate in the United States,” said Davis, who majored in digital media, broadcasting and journalism at Cedarville. “From the minute that I read the script, I knew that it was a story that I had to tell. The story is a real example of crossing racial barriers through the redemptive power of the gospel.”

Though he started his career in radio and television broadcasting, Davis found a passion for storytelling through film. In 2000, he founded his production company, Uptone Pictures, and has since been part of telling meaningful stories through film.

Although it took Davis a few years to figure out his calling, his college professor knew of his ability to tell stories through creative ways.

“It is no surprise to me that Michael went into production,” said James Leightenheimer, associate professor of communication. “Even as a student, he always had an entrepreneurial spirit, a positive attitude. He could bring people together behind a vision and confront challenges head-on.”

The making of “Paul’s Promise” faced many challenges throughout the entire process, but Davis saw God’s provision in ensuring the movie was finished. In the fall of 2020, Davis had been working on producing a separate project for nearly two years when a large investor dropped out, ending the film on the spot. The very next day a different investor called with the same amount of funding and a request to produce “‘Paul’s Promise.”

“The funding for the film was providential,” said Davis. “I went from two years of work lost at 3 in the afternoon on Friday to having a new project—Paul's Promise--within 15 hours.”

Filming began in New Mexico in November 2020 and finished in January 2021 in Los Angeles.

“We had many difficulties along the way,” said Davis. “We had to edit the script to accommodate filming during the COVID pandemic. We had to change locations, reshoot scenes and change out cast members. The making of a film has so many moving pieces that when it finally is finished it is a miracle. Looking back, I can see God’s provision and guidance in this project.”

“’Paul’s Promise’ is not only well done and timely, but it presents a clear gospel message. It is critical for Christians to engage with culture and the best way to do that is through entertainment. We hope our graduates can do what (Davis) is doing — sharing the gospel through his work.”

Davis shares his journey in broadcasting and filmmaking on the Cedarville Stories podcast. You can hear the podcast at cedarville.edu/cedarvillestories.

Cedarville University’s Department of Communication will hold a showing of “Paul’s Promise” on Thursday, Nov.  10 at 7 p.m. in the DeVries Theatre, followed by a Q&A with Davis and several of the film’s actors.  The event costs $11 and is open to the public.

Located in southwest Ohio, Cedarville University is an accredited, Christ-centered, Baptist institution with an enrollment of 5,082 undergraduate, graduate, and dual-enrolled high school students in more than 175 areas of study. Founded in 1887, Cedarville is one of the largest private universities in Ohio, recognized nationally for its authentic Christian community, rigorous academic programs, including the bachelor’s in broadcasting, digital media, and journalism, high graduation and retention rates, accredited professional and health science offerings, and the #4 national ranking by the Wall Street Journal for student engagement. For more information about the University, visit cedarville.edu.