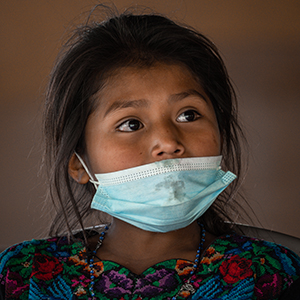 Cedarville University junior Jonathon Lipscombe could never have imagined his Lego stop-motion videos would turn into a globetrotting missions internship.

Lipscombe, a biblical studies major from Spring Lake, Michigan, has worked with Advancing Ministries of the Gospel (AMG) International for the last 17 months as a global advancement intern, capturing on film what is happening in missions around the world. Lipscombe has worked as both a virtual intern and in-person with AMG Guatemala.

Lipscombe became interested in videography in elementary school when he would make stop-motion videos of Lego characters having fantastic adventures.

“I get to be a part of missions, to see the impact of short-term mission trips, and to promote the gospel worldwide using my photography!”

In middle school, he graduated to semi-professional photography, working with friends and family to take portraits and group photos. By the time he was in high school, photography was a passion. However, Lipscombe was seeking a way to unify his passion for media and his love for ministry.

“My church was always missions-focused, but it was never something I imagined myself doing,” said Lipscombe. “That all changed when I went on my first mission trip to Guatemala during my junior year of high school.”

In the weeklong trip with his home church, Lipscombe described the eye-opening exposure to poverty and need he had never seen in the United States. And with that experience came a passion for missions.

“I had that all-too-familiar scene where I got home and wanted to sell everything and immediately go into missions,” said Lipscombe. “I made myself wait nine months and pray about God’s call in my life. After those nine months, I planned a six-week internship in Guatemala through AMG International.”

In August 2020, Lipscombe was accepted into a year-round internship with AMG international, one that combined both his love of photography with missions. He creates photos and videos used by AMG’s advancement department, which is responsible for fundraising.

“Working as an advancement intern has given me the opportunity to capture all that the Lord is doing around the globe,” said Lipscombe. “I get to be a part of missions, to see the impact of short-term mission trips, and to promote the gospel worldwide using my photography!”

However, due to COVID-19, Lipscombe’s plans to travel across the globe were halted. While he was still able to work as a remote intern for the year, it did not seem like global travel was a possibility. However, when Cedarville University’s global outreach program announced plans to volunteer with AMG in Guatemala for a summer mission trip, Lipscombe was given the opportunity to come along.

“I was reluctant to go,” said Lipscombe. “I was coming off of a very busy semester, and the entire project felt overwhelming. But now, looking back, I am so thankful for that week. It was one of the most impactful trips of my life.

“I had to step back and look at the week through a camera lens,” he added.  “It gave me a different perspective on missions … literally.”

For Lipscombe, one part of the trip, specifically, had a great impact on how he views ministry.

“There was one little girl on the trip who really captured my attention,” remembered Lipscombe. “All week, I had thousands of photos of kids smiling and playing soccer. But there was one station where the kids had to sit and listen to the camp’s Chaplain discuss faith in action. A lot of the kids were having trouble focusing but this one little girl just sat and listened quietly. It was a different face than I had captured all week. She was contemplative.”

Lipscombe currently teaches Sunday school for middle schoolers at his church, Cypress, and his time in Guatemala has impacted how he interacts with the kids in his class.

“After I saw that little girl, it made me realize how much kids absorb,” said Lipscombe. “I got to see how much is communicated, even through masks, even with language barriers. It showed me how important working with middle schoolers at my church is. They may be at home, but working with children is a mission field of its own.”

Lipscombe plans to continue his internship with AMG and is thankful for the opportunities he has had to work in both missions and media. He hopes to find a postgraduation role that will allow him to continue combining his passion with his vocational interest.

Located in southwest Ohio, Cedarville University is an accredited, Christ-centered, Baptist institution with an enrollment of 4,715 undergraduate, graduate, and online students in more than 150 areas of study. Founded in 1887, Cedarville is one of the largest private universities in Ohio, recognized nationally for its authentic Christian community, rigorous academic programs, including the Bachelor of Arts in biblical studies,strong graduation and retention rates, accredited professional and health science offerings, and high student engagement ranking. For more information about the University, visit cedarville.edu.