Mom and Mayor Sarah Mays At Your Service

Being a hero to your children is part of any parent’s job description, but Mayor Sarah Mays’ two children think she has superpowers.

Last January, Mays took office as mayor of her hometown — Xenia, Ohio. Since then, her two children, Freddy and Layla have informed their mother that, as mayor, she no longer needs to stop at red lights or wait in line at the grocery store. “My kids think I can do anything — they think I have superpowers.” 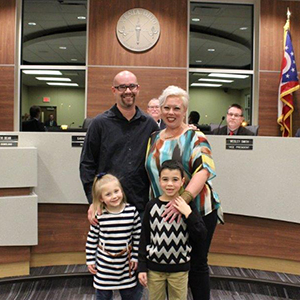 Despite what her kids may think, Mays didn’t run for mayor because of the perks of the job. She has a deep love for her family and her community, and these two factors, in addition to her Christian faith, are the reasons she serves in this position.

The road to this role is evidence of God’s patient goodness to her, Mays said. She began college at Cedarville University in 1997, but because she left school for five years, didn’t earn her diploma until 10 years later in 2008.

“I was not at all a good student when I started,” she said, “but God was very good. He could have brought me back to him a lot of different ways, but he did it gently and lovingly, and I’m so thankful for that.”

When she returned to Cedarville as a 27-year-old senior, Mays experienced a humbling, but rewarding, time of growth. “Because my life perspective shifted, and I could see that being back there was a gift, I loved my last ‘year’ at Cedarville,” said Mays.

Mays and her husband, Adam, married in 2007, and they settled in Xenia. She put her hard-earned psychology degree to work when they became foster parents in 2010. In 2011, the Mays adopted their son, Freddy, and their family grew again a few years later when they adopted daughter Layla.

Freddy and Layla see their Mom at work doing what Mays considers the biggest part of her job: being the face of the city. This responsibility isn’t always easy. “People know who I am, and there’s no way around that,” said Mays. “Just like anybody else, I’ll go to Aldi’s in sweatpants, and my kids will be going crazy, but I know that someone will recognize me, and I have to be mindful of that.”

Mays serves as mayor because she cares about her community. In addition to council meetings and engagements that come with being mayor, she also holds a weekly girls Bible study in her home and works part time at Emmanuel Baptist Church, where she has attended since she was a little girl.

Mays story has grabbed the attention of Christian radio network KLOVE, who will air a piece about her nationally on May 1. KLOVE can be heard locally on 90.3 FM.

As both mayor and mother, Mays faithfully undertakes politics and parenting, two things that on their own can terrify and overwhelm most people.

Could she have superpowers? Just maybe.

Located in southwest Ohio, Cedarville University is an accredited, Christ-centered, Baptist institution with an enrollment of 3,963 undergraduate, graduate, and online students in more than 150 areas of study. Founded in 1887, Cedarville is recognized nationally for its authentic Christian community, rigorous academic programs, strong graduation and retention rates, accredited professional and health science offerings, and leading student satisfaction ratings. For more information about the University, visit www.cedarville.edu.