Little did three Cedarville University students know their assigned community survey in Washington Court House, Ohio, would inspire a longer commitment. But  Sara Lents, Olivia Baden and Sarah Himes were moved with compassion for the people at Second Chance Center for Hope because they saw an opportunity to serve. 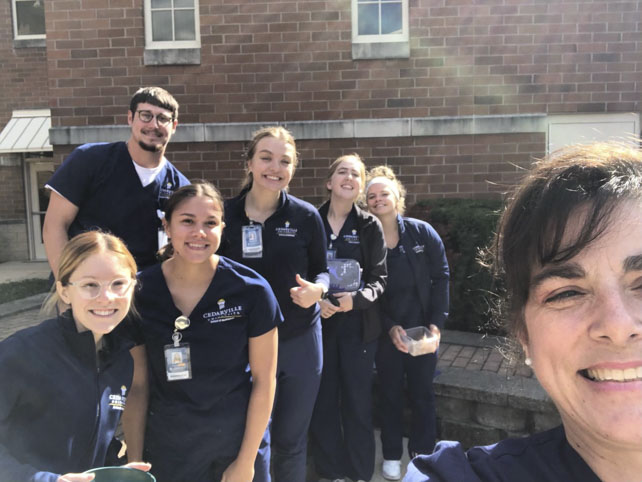 As part of their Care of Populations class, the Cedarville trio's clinical group conducted a “windshield survey” to familiarize themselves with the rural Ohio city so they would better understand the needs of the community and its residents regarding existing care for the underprivileged. As part of the windshield survey, Lents, Baden and Himes each walked the streets of the town to talk with local residents and gain a firsthand perspective of the needs.

Lents’ interest in Washington Court House is based on her connection with the community through attending Crossroads Church. The clinical group plans on volunteering during their free time each Tuesday morning or afternoon, performing tasks such as preparing meals, answering phones and organizing events.

“I didn’t know this community that I feel a part of had all these people in need,” said Lents. “People here have poured into me, and I want to give back by pouring into the community.”

“As soon as we walked in, we felt the Spirit at work."

Second Chance provides resources for unemployed, homeless or financially struggling residents. They provide a place to sleep while helping people get connected to potential employers. They even offer temporary employment fashioning car parts in an attached workshop.

“They offer a hand up, not a handout,” said Himes of McCordsville, Indiana. “It helps rehabilitate people, allowing them to move past where they are now.”

In their research, the students asked questions about Second Chance’s services and its need for volunteers. The more the students learned, the more they felt led to offer their time and energy to serve the people.

“The people in Washington Court House have plenty of needs, so the ministry opportunities are plentiful, and we can help meet those needs by loving the people,” said Lents.

The students credited Second Chance’s relationship-based service model for the center’s success. Program director Chiquita Nash has been involved in her community for over 50 years.

“It’s not all about what you can do for them,” said Baden of Sunbury, Ohio, the third member of Cedarville student clinical team. “You can learn so much from the people in local communities.”

The group’s motivation to volunteer derives from their heart to serve where they are, which is an emphasis of Cedarville nursing classes.

Located in southwest Ohio, Cedarville University is an accredited, Christ-centered, Baptist institution with an enrollment of 5,082 undergraduate, graduate, and dual enrolled high school students in more than 175 areas of study. Founded in 1887, Cedarville is one of the largest private universities in Ohio, recognized nationally for its authentic Christian community, rigorous academic programs including its Bachelor of Science in Nursing, high graduation and retention rates, accredited professional and health science offerings, and the #4 national ranking by the Wall Street Journal for student engagement. For more information about the University, visit cedarville.edu.