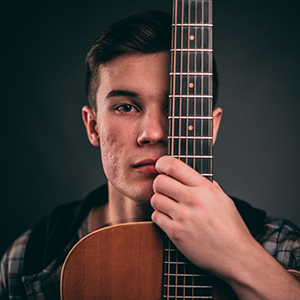 The parable of the prodigal son is a beloved story of redemption and restoration. And as it turns out, it is also the perfect theme for one Cedarville student’s first full-length album.

Cedarville junior worship major Noah Ayers is set to release his new album, “Of Rebels and Prodigals,” based on the parable of the prodigal son, in February 2022.

“That has always been one of my favorite stories in the Bible,” said Ayers. “I think it is a beautiful and unique picture of how God loves his children.”

Ayer's album will feature 10 songs, each from the perspective of one of the three main characters in the parable, which is found in the New Testament gospel of Luke.

Even when I don’t like or understand God’s plan, I have to let go and surrender to His will."

“The story has multiple main characters that each teach valuable lessons,” said Ayers. “The prodigal son is the wayward one, who is of the world and thinks he can do things on his own. He comes to his senses and repents and is welcomed back into the father’s home. It is a beautiful picture of God’s salvation for sinners.”

While most people exclusively focus on the prodigal son, Ayers also wrote songs from the perspective of the father and the older brother, working to convey the important lessons in each aspect of the story.

“The song from the father’s perspective was by far the most difficult to write,” said Ayers. “In the parable, the father represents God. I really felt the weight of putting words to God’s heart. I wanted to articulate His unconditional love while also describing the extravagance of His grace. God does us deeper than anyone and despite our worst struggles and mistakes, freely offers us forgiveness. The redeeming nature of His love is truly spectacular”

For Ayers, staying true to the Bible’s text was the most important part of his lyrics.

“I wanted to make sure every one of my lyrics is firmly rooted in Scripture,” said Ayers. “When I am writing I am constantly in Scripture, sending my lyrics to friends and family who can give another perspective.”

The album is very personal to Ayers, who chose to include a song from the point of view of the older brother that he feels has become his personal testimony song.

“There is a song called “God My Father” that I re-recorded for this album,” said Ayers. “When I was a junior year in high school I moved from Texas to Ohio. It was a difficult season of life when I struggled to let go of the hopes and dreams I had in Texas.

"I had a plan for my life and I wanted to be in the driver’s seat. Ultimately, I had to learn that faith requires surrender. Even when I don’t like or understand God’s plan, I have to let go and surrender to His will. In many ways, this is similar to the older brother who struggles to get on board with his father’s plan. This song is about trusting God’s will and resting in His sovereignty.”

“Of Rebels and Prodigals” is set to be released on all digital music platforms in February 2022. Along with writing and performing all 10 songs, Ayers is also producing the entire album.

“To produce and write is a lengthy process, I am so excited to finally release it and share these songs!”

Located in southwest Ohio, Cedarville University is an accredited, Christ-centered, Baptist institution with an enrollment of 4,715 undergraduate, graduate, and online students in more than 150 areas of study. Founded in 1887, Cedarville is one of the largest private universities in Ohio, recognized nationally for its authentic Christian community, rigorous academic programs, including the Bachelor of arts in worship program, strong graduation, and retention rates, accredited professional and health science offerings, and high student engagement ranking. For more information about the University, visit cedarville.edu.