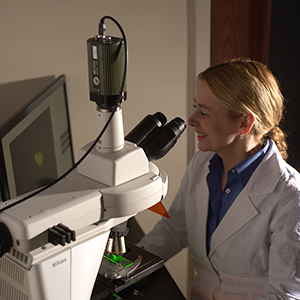 Dr. Heather Kuruvilla and her students at Cedarville University are researching ways to stop cancer before it starts.

Kuruvilla, senior professor of biology, along with a team of undergraduate students, sought to discover if Tetrahymena thermophila, a single-celled organism commonly used in experimental biology, possessed proteins similar to Ras and Raf, two proteins that regulate cell reproduction in humans.

If these pathways were shared between humans and Tetrahymena, Kuruvilla and her students plan to begin using Tetrahymena as a model in which to test potential cancer treatments.

“Everyone, and I am not exempt from this, knows someone that has been impacted by cancer,” said Kuruvilla.

“Everyone, and I am not exempt from this, knows someone that has been impacted by cancer."

“As a cell biologist, I study how these pathways work in homeostasis, health, and disease. What we are trying to do is understand those pathways better so when they are broken, we can fix them.”

“People should know this isn’t necessarily linked to a cure yet; this is very preliminary stuff,” she noted. “There’s a lot of motivated people who will be working for a long time to get this stuff done.”

The team’s database analysis revealed that genes similar to those that produce human Ras and Raf were present in the Tetrahymena genome database. Consistent with the database findings, Kuruvilla and her students found that using a drug to inhibit the Ras/Raf pathway greatly reduced cancerous cell division in Tetrahymena.

Because cancer involves unregulated cell growth, scientists are always looking for new drugs which could be used to slow or stop the growth of cancer cells.  Kuruvilla’s research indicates that Tetrahymena may be a useful model on which to test new growth-inhibiting drugs.

If effective, these drugs could then potentially be tested in animals, and eventually in human subjects. “At the end of the day, if these drugs pan out, we could help cure somebody's cancer, or at least put it into remission.”

“People should know this isn’t necessarily linked to a cure yet; this is very preliminary,” she noted. “There’s a lot of motivated people who will be working for a long time to move from initial studies to actual therapies.”

Further studies by Kuruvilla’s group will seek to determine the effective dosage of the Ras/Raf inhibitor, as well as how this drug affects cell viability.

Located in southwest Ohio, Cedarville University is an accredited, Christ-centered, Baptist institution with an enrollment of 4,715 undergraduate, graduate, and online students in more than 150 areas of study. Founded in 1887, Cedarville is one of the largest private universities in Ohio, recognized nationally for its authentic Christian community, rigorous academic programs, including its Bachelor of Arts and Bachelor of Science in Biology, strong graduation and retention rates, accredited professional and health science offerings, and high student engagement ranking. For more information about the University, visit cedarville.edu.