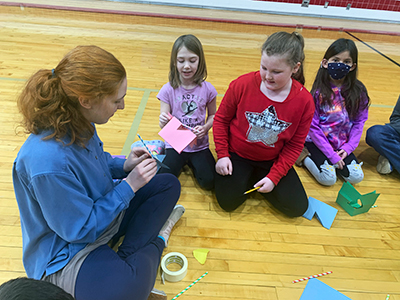 While students from Cedarville University’s NASA Student Launch team work hard on their rocket ahead of their competition later this month at Marshall Space Flight Center in Huntsville, Alabama, they’re also teaching rocket basics in the local community.

“Just as we learned from other people how to make rockets, in our way we’re contributing and helping people to learn too.”

They also showed off their subscale rocket, described what the various components were, and explained Newton’s third law of motion, that every action has an equal and opposite reaction. Finally, students competed to see how far and straight they could throw their straw rockets.

"The Cedarville University students did a wonderful job of reviewing the scientific method with our students,” said Roxy Huck, a third-grade teacher at Cedarville Elementary. “Their program made this process realistic as our students were able to see firsthand something that had been created using this method.”

In early March, team members held an event on Cedarville University’s campus for college students, with around 30-35 students showing up. They taught students the basics of rocket design. Students customized two-liter bottles, added fins, and launched rockets outside of the Apple Technology Resource Center.

“I think STEM engagement is a very valuable part of the team,” said team leader Chad Sanderson, a senior mechanical engineering student from North Huntingdon, Pennsylvania. “Just as we learned from other people how to make rockets, in our way we’re contributing and helping people to learn too.”

Located in southwest Ohio, Cedarville University is an accredited, Christ-centered, Baptist institution with an enrollment of 4,715 undergraduate, graduate and online students in more than 150 areas of study. Founded in 1887, Cedarville is one of the largest private universities in Ohio, recognized nationally for its authentic Christian community, rigorous academic programs, including the Bachelor of Science in Mechanical Engineering and Bachelor of Science in Computer Engineering programs, strong graduation and retention rates, accredited professional and health science offerings and high student engagement ranking. For more information about the University, visit cedarville.edu.