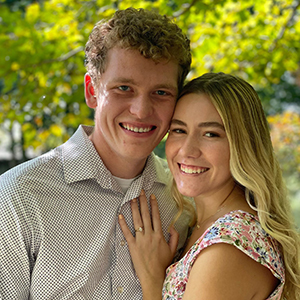 More than five years after he survived a high school shooting, Logan Cole, a senior information technology management student from West Liberty, Ohio is preparing to graduate from Cedarville University.

Cole will be part of the record number of 924 graduates at Cedarville's 126th commencement ceremonies. The largest graduating class in university history is comprised of 774 undergraduates and 150 graduate students.

Cedarville will hold two ceremonies — at 10 a.m. and 2 p.m. — Saturday, May 7, in the Doden Field House. The morning commencement ceremony will grant degrees to undergraduate and graduate students from the schools of allied health, business, education, engineering and computer science, and nursing. Cedarville offers a graduate degree in nursing as well as an MBA.

“After the shooting, God showed me how he works through people, how he saves people and how he can make miracles work."

Undergraduate and graduate students from the departments of art, design, and theatre; communication; English, literature, and modern languages; history and government; interdisciplinary studies; music and worship; psychology; science and mathematics; and social work and the schools of biblical and theological studies and pharmacy will receive their degrees in the afternoon ceremony. Cedarville offers master’s degrees from the school of biblical and theological studies and a doctoral pharmacy degree.

Cole was a high school junior when he was shot on January 20, 2017, by a classmate. The gunman fired at him with a shotgun as he walked into a bathroom, and, although Cole blacked out after the shot, he eventually managed to crawl to the other side of the bathroom for safety.

After the shooter shot at two classroom doorways, striking another student with a shotgun pellet, he came back to reload, and Cole urged him to stop and get help before he killed someone else or himself. The shooter eventually surrendered to school authorities.

“There are a lot of things that went just perfectly so that I am here right now,” Cole said. “If the shotgun had been aimed a fraction of an inch to the left or right, I wouldn’t be here. It was a God thing in the way that he worked.”

Cole spent the next 15 days recovering in the hospital and the next three months wearing a neck brace. He mostly recovered by the end of his junior year and had a normal senior year before coming to Cedarville for college.

“When it came time for graduation, I didn’t really consider many other options,” Cole said. Cedarville is within an hour of his home. Additionally, his parents attended Cedarville, and his sister, Leah, graduated from Cedarville in 2020.

Though he was familiar with the school, college was still a big adjustment. Cole came from a smaller high school where he was well-known, while at Cedarville, he was able to blend in with a much larger student body.

Cole said that he’s had plenty of opportunities to grow throughout his time at Cedarville.

“I’ve gained friendships and relationships that I expect to last for a really long time, and they’ve provided me with a lot of joy and happiness through the time I was here,” he said.

Spiritually, Cedarville continued a process of growth for Cole.

“After the shooting, God showed me how he works through people, how he saves people and how he can make miracles work,” Cole said. “That really inspired me to pursue my faith and take it more seriously, but then coming to Cedarville gave me the tools to better pursue that passion.”

Cole continues to deal with back pain resulting from the shooting, and he and his doctors don’t know what long-term side effects may come from the high lead levels from the birdshot in his body – most people who are injured that badly don’t survive.

But right now, Cole’s mind is on other things. After graduation, Cole will begin work at his family’s packaging business, where he intends to stay long-term to help grow the business. And in the summer, he will marry his fiancée, Addy.

Cole’s biggest piece of advice for current and upcoming college students is to be content.

“One thing I’ve been trying to focus on is being content and happy where I am,” Cole said. “Cedarville is amazing, but I see myself in a transition phase where I’m looking ahead to the next stage. I’m really trying to be thankful for the time right now where I am that God’s given me because there are a lot of things that I’m going to be leaving that I will miss.”

Located in southwest Ohio, Cedarville University is an accredited, Christ-centered, Baptist institution with an enrollment of 4,715 undergraduate, graduate, and online students in more than 150 areas of study. Founded in 1887, Cedarville is one of the largest private universities in Ohio, recognized nationally for its authentic Christian community, rigorous academic programs, including the Bachelor of Science in information technology management program, strong graduation, and retention rates, accredited professional and health science offerings and high student engagement ranking. For more information about the University, visit cedarville.edu.