Serving His Community One Donation At A Time

Finding ways to serve local communities is a common trait among faculty and staff members at Cedarville University. Steve Gollmer, assistant chair of the department of science and math, is no exception. 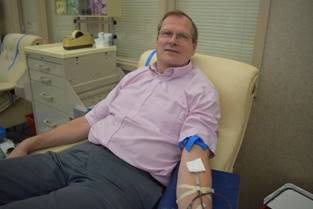 Gollmer recently made his 100thblood donation at the Community Blood Center in Dayton, Ohio with the purpose of helping someone he probably doesn’t know.

Gollmer grew up on a farm in northwest Illinois and witnessed his parents’ faithful example of donating blood at their local hospital. As soon as Gollmer was 16 years old—the minimum age to donate blood--he began donating blood on his own accord.

“Blood donations are needed for surgeries and accident victims,” said Gollmer. “And blood is a perishable unit, so you can’t just donate and keep it around. It has to be discarded after its expiration date.”

Gollmer has type O- blood, which qualifies him as a universal donor. His blood can be used on any person regardless of their blood type.

Beyond that, there is another blood marker commonly used called CMV, or cytomegalovirus. CMV is a virus that leaves a marker on your blood if contracted. Many people contract the CMV virus at some point in their lives, as it is not deadly. However, the marker it leaves on your blood can affect who you donate to. Those who have previously contracted this virus have the CMV blood marker and therefore cannot donate to people who haven’t. Those who have not previously contracted the virus have a CMV- marker on their blood.

In addition to being O-, Gollmer is also CMV-, allowing his blood to be used for pediatric donations as well as adult. Infants should only receive blood that is CMV-, making Gollmer’s donations all the more valuable.

“You’ll see in the news every once and a while, that there is a higher demand for units of blood, especially in the case of natural disasters. There will always be a need.”

Gollmer studied physics and atmospheric science, and he currently teaches physics and meteorology among other courses at Cedarville. He came to Cedarville in 1994, and he is currently in his 29th year of teaching. He is just one example of the many faculty and staff members that seek to serve their community.