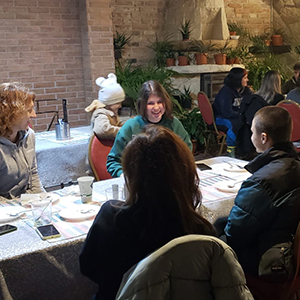 Leah Harper knew at the age of 8 that she was called to be a missionary. After a high school trip to Romania, she decided she wanted to serve in that country as a social worker. Now, less than one year into her role of serving people in Romania, she is serving Ukrainian refugees who are caught up in a major humanitarian catastrophe.

Harper graduated from Cedarville in 2020 with a Bachelor of Science in social work degree. After earning her master’s degree from Ohio State University, she moved to Cluj-Napoca, Romania, in September 2021 to serve as a social worker.

Normally, Harper serves with two of the six nongovernmental organizations (NGOs) that care for vulnerable populations in the city: Phoneo, which is associated with the Methodist church, and Alfa, which helps orphans and young adults who have aged out of the orphanage.

“These people are not directly involved in this conflict apart from where they live, yet their lives have been uprooted or ended.”

Harper also makes breakfast for guests at the community center, which formerly was a hotel and still operates 10 hotel rooms as a source of income.

Five months into Harper’s job, the center faced a new challenge: Russian forces invaded Ukraine, which is located to the northeast of Romania, and sparked a refugee crisis.

Neighboring countries have answered the call to welcome these refugees, who according to United Nations High Commissioner for Refugees Filippo Grandi numbered more than one million in the first week alone. Most of these are women and children, as men aged 18-60 are required to stay behind to defend their country.

Many refugees have come to the community center, and all the hotel rooms are being used to provide them with free housing and meals. While some use the center as a stop before they go to stay with family or friends abroad, others have nowhere else to go, and the center finds them host families or apartments.

“I have heard of people sleeping in hallways because nearby explosions caused their windows to break,” Harper said. “I have heard stories of families being separated because men are not allowed to leave the country. There are people crossing the border by walking because there is no way to get gas for their cars; crossing the border into Romania at one point involved a 24-hour wait.”

Harper encouraged Americans to pray for peace, noting that civilian areas have been bombed and that Russian forces have used weapons that are banned by the United Nations.

“One of the most impactful conversations I’ve had was with a woman from Odesa who showed me a side-by-side comparison of the opera house in her city: a picture from today and a picture from World War II,” Harper said. “They looked almost identical.”

She also said that Americans can pray for the women and children who have had to leave their husbands and fathers behind, that they would find safety and be protected from traffickers, for courage and wisdom for the Ukrainian army and people, for confusion for the invading Russian army, for Russian soldiers to have their eyes opened about the war and for the Russian civilians who are also scared and angry about the war. Finally, she encouraged Americans to pray for neighboring countries and volunteers who are providing for the refugees, that they would be able to help them and share Christ.

“Most of these refugees are scared, hoping for this conflict to end soon, but scared of what they will go back to if they return to their homes,” Harper said. “These people are not directly involved in this conflict apart from where they live, yet their lives have been uprooted or ended.”

Harper encouraged Americans who feel inclined to give to be discerning in the organizations that they support. Americans who wish to support Harper’s church and a sister church in Romania can go to https://worldmethodist.org/donate/ukraine/.

Located in southwest Ohio, Cedarville University is an accredited, Christ-centered, Baptist institution with an enrollment of 4,715 undergraduate, graduate, and online students in more than 150 areas of study. Founded in 1887, Cedarville is recognized nationally for its authentic Christian community, rigorous academic programs, including its Bachelor of Science in social work program, strong graduation, and retention rates, accredited professional and health science offerings, and high student engagement ranking. For more information about the University, visit www.cedarville.edu.