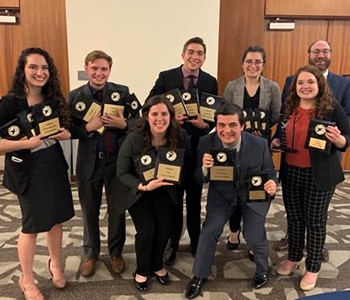 Boesch of Champaign, Illinois, was the overall tournament national champion in speech.

“I believe that at the end of the day the success God gave brought us even closer together.”

“For this tournament, we all piled into a 12-passenger van, drove to Virginia, stayed in an Airbnb, and spent several days competing with dozens of students from different universities," said O'Malley. “Whatever the format is for a tournament, it’s always super fun to just be together.”

“I believe that at the end of the day the success God gave brought us even closer together,” said Miller. “It was one of those things that can’t help but unite a team together even closer than ever before. It gives me joy seeing how much the team loves each other and uplifts each other.”

Located in southwest Ohio, Cedarville University is an accredited, Christ-centered, Baptist institution with an enrollment of 4,550 undergraduate, graduate, and online students in more than 150 areas of study. Founded in 1887, Cedarville is recognized nationally for its authentic Christian community, rigorous academic programs, including its Bachelor of Science in Communication, strong graduation, and retention rates, accredited professional and health science offerings, and high student engagement ranking. For more information about the University, visit www.cedarville.edu.