Whether it was basketball, baseball, or golf, athletics were always and an important part of Chris Cross’ life. Originally from Pittsburg, Pennsylvania, Chris made sports a very central part of his life, starting in middle school and continuing all the way through college. 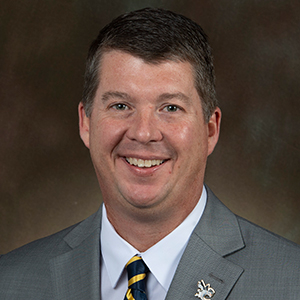 In 2014, Chris began serving as Assistant Director of Athletics for Compliance at Cedarville University, and in February of 2022, he was promoted to Athletic Director.

Since stepping into the role as Athletic Director, Chris and his team of coaches have set the vision for the upcoming year. He believes students-athletes should seek to “be known as servants of Christ.”

Chris is determined that student athletes represent and promote the brand of Cedarville University. His desire is that when his athletes interact with athletes from other schools, there is no question about what they believe and what they stand for.

As the new Athletic Director, Chris wants to make sure Cedarville is taking care of their own athletes, focuses on their health and well-being. He wants athletes to be known by their personal relationship with Christ and their commitment to serving and honoring him. The athletic department is turning their focus internally to promote academic excellence and spiritual growth.