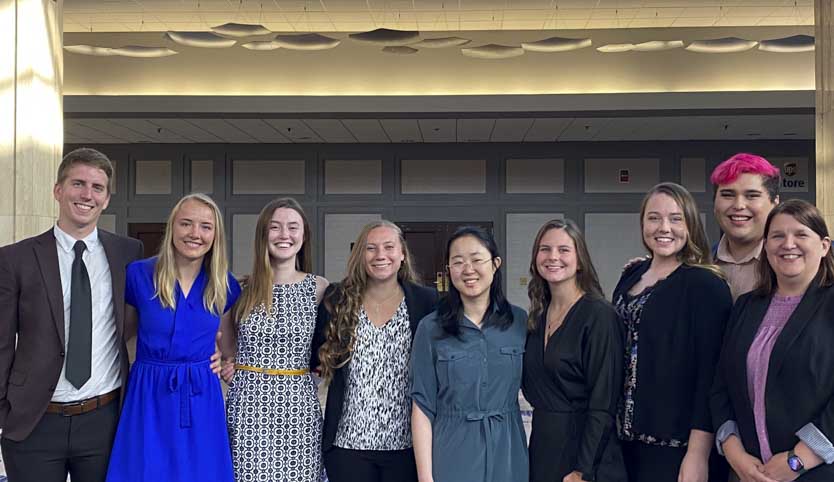 Additionally, Cedarville University’s student chapter was one of the runner-up competitors for Medium Sized Chapter of the Year and won the second place Power to End Stroke Initiative Award.

"To have students consistently stand out at the top of 140-plus pharmacy schools across the nation shows the training they’ve received to meet patients where they are through love and service," said Aleda Chen, associate dean of pharmacy.

“Our students are really trying to love God and others through these kinds of competitions."

Chapter president Zach Krauss from Springfield, Ohio, won three awards, including being named a public liaison for the SNPhA National Board, a part-time position directing communications for the association. Krauss also won the Kroger Endowed Scholarship and was one of eight nominees for SNPhA Chapter President of the Year out of 100 candidates.

“Zach is almost always the first one to step up and volunteer for something," said Chen. "His willingness along with his experience studying theatre and working with the campus newspaper gave him skills he needed to earn that position.”

“We don’t go out and serve just to win awards,” added Chen. “The Lord brings us exceptional students that prove it is possible to be great pharmacists, while still being missionally minded and caring for their communities of patients.”

Located in southwest Ohio, Cedarville University is an accredited, Christ-centered, Baptist institution with an enrollment of 4,715 undergraduate, graduate, and online students in more than 150 areas of study. Founded in 1887, Cedarville is one of the largest private universities in Ohio, recognized nationally for its authentic Christian community, rigorous academic programs, including the Doctor of Pharmacy, strong graduation and retention rates, accredited professional and health science offerings, and high student engagement ranking. For more information about the University, visit cedarville.edu.