Change is a way of life on college campuses. As programs and campus life change, further growth is possible.

That’s the case at Cedarville University, which has experienced changes with the construction of new facilities for its students. Just last year the university completed an athletic and academic expansion to the Callan Athletic Center that will strengthen the university’s NCAA II athletic programs and offer state-of-the-art classroom facilities for its Master of Athletic Training degree and the future Physician Assistant program — slated to begin in summer 2023. 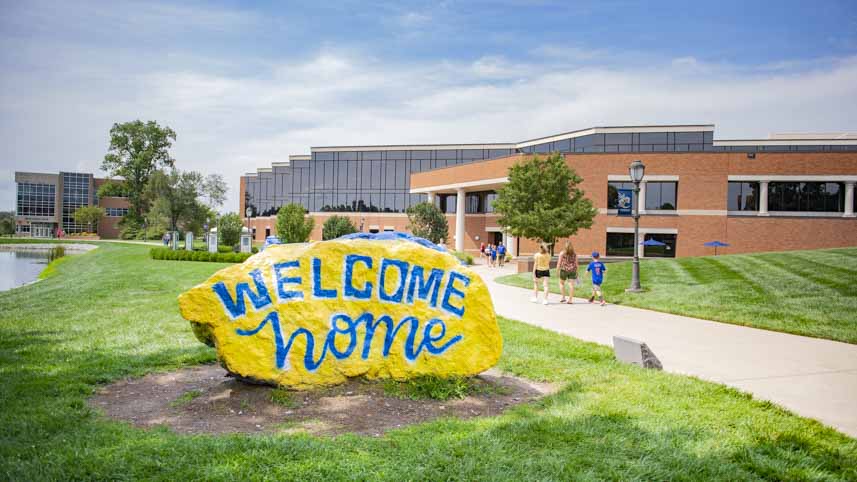 The university also began construction on its $40 million Scharnberg Business Center that will provide classrooms for the Robert W. Plaster School of Business, the university’s cybersecurity center and the communication department.

When the location of the Scharnberg Center was determined, it created the need for another change— relocating “The Rock.”

The Rock has been a Cedarville tradition since 1978. It was initially placed near the Tyler Digital Communication Center, but was eventually moved near Cedar Lake between the Stevens Student Center and Dixon Ministry Center.

“The Rock was a way of communication. When I got to Cedarville, computers were still cutting-edge technology. We didn’t use email for mass communication, and the rock is how messages were 'sent.’”

The Rock holds many years of campus tradition that includes painting informative messages, Bible verses or even a birthday shoutout.

“The Rock is fun because it is completely student led. I have loved the community aspect of The Rock, that anyone is empowered to paint on it,” said Susannah Sowell, a junior from Westport, Kentucky, majoring in psychology and Spanish. “I have many memories of painting it myself, close to midnight with lots of friends, as well as looking at the occasional impressive art from my seat in Chuck’s.”

The idea of having a rock on campus to build campus community was the idea of longtime student life leader Dick Walker. It was Walker’s vision to use the rock to help students communicate with each other in a light-hearted manner.

“There are very few things on campus that have the longevity and visibility of this campus tradition. Most alumni whether they painted The Rock or not would at least remember The Rock,” said Walker, who served as resident director, dean of men, director of campus activities, and in the alumni relations office during his 40 years at Cedarville. He is also known as the founder of Getting Started Weekend on the University’s campus.

Currently, The Rock is behind a construction fence due to the construction taking place for the Scharnberg Business Center. It is expected to be relocated to a new spot near the heart of campus in 2023. And, once it returns to its new location, students will return to sending fun messages to classmates on The Rock.

“There’s still value in The Rock after all these years,” said Walker. “We don’t always understand the value of a smile or what a simple message on The Rock can bring.”