“The Giver” to Premiere Homecoming Weekend

For its fall mainstage production, the Cedarville University theatre department will perform “The Giver,” the award-winning book by Lois Lowry, adapted for the stage by Eric Coble. 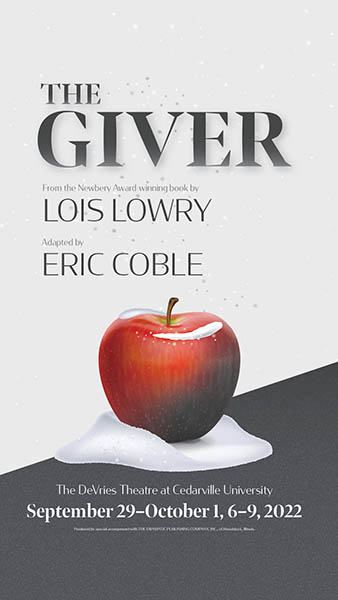 The show opens September 29 and runs through October 9. Beginning September 9, tickets can be purchased online or from the information desk in the Stevens Student Center.

“The Giver” is a haunting story centered on young Jonas, who lives in a seemingly ideal, if colorless, world of conformity and contentment. Not until he is selected to be the "Receiver of Memory" does he begin to understand the dark, complex secrets behind his fragile community. This show is recommended for audiences of middle-school age and older.

The play explores the theme of free choice and being human. “It truly depicts what could be if man were deprived of free choice,” said Stacey Stratton, assistant professor of theatre and director of the production. “This society shows how you can live this existence where all the decisions are made for you, but you’re deprived of love. Even families aren’t families in ‘The Giver’—they're assigned. There are no strong feelings. It’s just all gray.”

Konuch’s first role at Cedarville was Klaus Bonhoeffer in the university’s spring 2022 production of “The Beams Are Creaking,” which paved the way for him to star in the upcoming production.

“Everything we do on the stage can point people to God, if we do it in the right way. I want to use it to serve others.”

David McFaddin, a music major from Delaware, Ohio, has the title role of the Giver. This is his first performance with the Cedarville theatre department. The story has impacted him, and McFaddin hopes it does the same for the audience. “I think this play will not only entertain people but will give them something to think about,” he said.

Both actors are excited for this production. “The whole cast is bringing its A-game,” Konuch said. “It is going to be spectacular!”