The Impact of the Bergen Scholarship 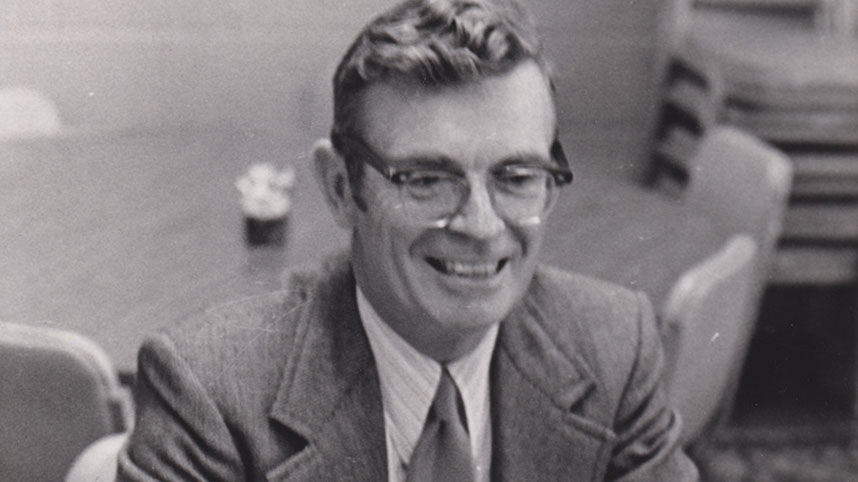 Since childhood, Josiah Kareck, a college student from Antioch, Tennessee, has wanted to travel to Ireland. Now, thanks to a new scholarship named after pioneers of study abroad at Cedarville University, Harmon and Audrey Bergen, he can.

The scholarship was presented to Kareck at a luncheon event on April 21, where he was able to meet Audrey Bergen and express his gratitude in person.

The Harmon and Audrey Bergen Study Abroad Scholarship is an annually funded scholarship made possible this year by a financial gift from Audrey Bergen and the late Harmon Bergen as well as other friends of Cedarville University. Professor Harmon Bergen came to the university in 1958 to teach German after several years of mission work in the Netherlands. In the 1980s, he became popular with students for the adventurous seven-week study abroad trips he led to Europe. These exciting global opportunities were the origin of Cedarville's current study abroad program.

“I cannot wait to get a firsthand look at religion in Ireland. And if I'm lucky, I may be able to fly to Germany for a weekend to visit Bonhoeffer's home.”

“Studying abroad is important for students for so many reasons. Besides the obvious academic credit that students receive, there are countless intangibles that come along with experiencing a new country and culture,” said assistant director for CU Study Abroad Anna Porter, who handles the logistics of connecting Cedarville students with study abroad opportunities. One of the offerings Porter is most proud of is the May term study abroad program that allows students to study outside of the country with a professor for three weeks during the month of May. "Enrolling in a May term program is a wonderful opportunity for every student, but it's not something that financial aid normally applies to,” Porter said.  “We know that already limits the number of students who are able to pursue a program like this. Dr. Johnson and I had talked about it and talked about it. We kept coming back to the fact that we need a scholarship.”

So, Porter and Dr. Pam Johnson, dean of undergraduate studies, reached out to Audrey Bergen.

Audrey and Harmon Bergen led a modest life together, saving conscientiously for the future and never living beyond their means, an outgrowth of their strong Christian faith. They had faithfully contributed money to missionary efforts and had to Cedarville University to be used as needed but had not chosen a specific cause to put the money toward at the university. When Dr. Johnson approached Audrey Bergen with the idea of putting the money toward a scholarship that allowed needy students to pursue the May term study abroad program, she agreed right away. As a surprise for Audrey Bergen, the scholarship was named after her and her late husband, who passed away in 2020. “We’re hoping others will help contribute to this scholarship in honor of the Bergens so it can become an endowed scholarship and thus be available for students well into the future,” said Johnson.

Kareck, the first recipient of the scholarship, will be traveling to Ireland during the month of May to study Intercultural Communication with Dr. Chuck Elliot, senior professor of communication at Cedarville University.  Porter will accompany them.

Kareck is eagerly anticipating exploring the green pastures, rugged bluffs, medieval history and Catholic architecture of Ireland. He also hopes to leave his “comfort zone” here in America and gain new perspective. Although Ireland has always been his dream travel destination, the opportunity to travel there has become even more meaningful to Kareck due to recent experiences.

“I recently had the most amazing opportunity to play Dietrich Bonhoeffer in the Cedarville theatre department's production of “The Beams are Creaking.” As I studied Bonhoeffer in preparation for the role, it turns out that much of his ideals stemmed from Catholicism. And Ireland has deep Catholic roots in its history,” said Kareck. “I cannot wait to get a firsthand look at religion in Ireland. And if I'm lucky, I may be able to fly to Germany for a weekend to visit Bonhoeffer's home.”

Located in southwest Ohio, Cedarville University is an accredited, Christ-centered, Baptist institution with an enrollment of 4,715 undergraduate, graduate and online students in more than 150 areas of study. Founded in 1887, Cedarville is one of the largest private universities in Ohio, recognized nationally for its authentic Christian community, rigorous academic programs,  strong graduation and retention rates, accredited professional and health science offerings and high student engagement ranking. For more information about the University, visit cedarville.edu.