Take a walk around Cedarville University’s campus, and the growth and excitement are obvious. 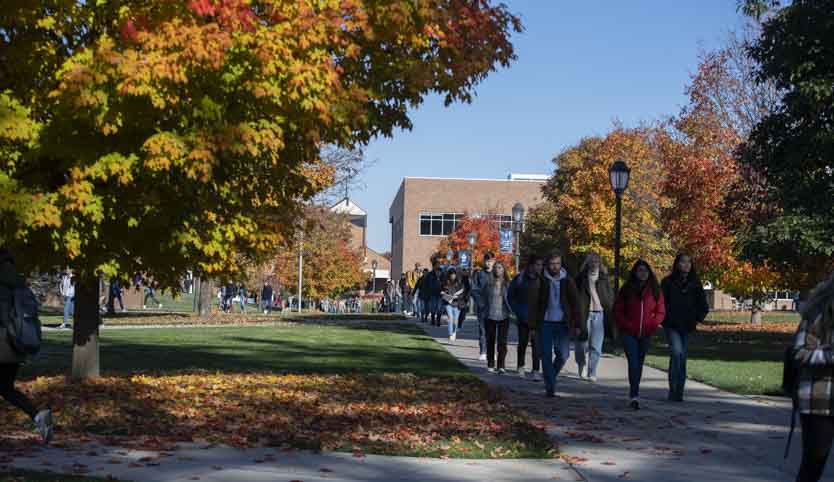 The university’s board of trustees was on campus for its annual fall meeting September 28-29. During the two days of meetings, university administrators provided reports on record enrollment, record fundraising and strong financial results and looked ahead to a 10-year vision for the university. The board took actions that will position Cedarville for continued growth.

Nationally, undergraduate enrollment is down 9.4% in the past two years. Cedarville’s record 5,082 enrollment, which includes undergraduate, graduate and dual-enrolled high school students, was up 7.8% compared to last year. The freshman class alone was up 17% at 1,139 students. In addition, the university’s $116.1 million in financial commitments toward its $125 million goal for “One Thousand Days Transformed: The Campaign for Cedarville” was highlighted with gratefulness for generous donors and the Lord’s blessing.

To keep up with the demands of the growing student body, Cedarville’s board of trustees unanimously approved the construction of a $34.2 million, 348-bed residence hall. The new residence hall, which will be the largest residence hall on campus when it opens in 2024, will be located in a new residential neighborhood to be built along the western edge of campus.

The university is currently constructing a three-story, 120-bed men’s residence hall that is slated to open for fall 2023.

“The trustees understand the transformation that is taking place in the lives of students at Cedarville, and they are committed to providing the infrastructure that is needed to continue this momentum."

Cedarville University has reported 13-consecutive record enrollments, and current trends for next fall’s incoming class of freshmen students indicate the possibility of another record class — and a reason for future students to submit their enrollment deposit early in the enrollment process to ‘lock in’ their residence hall room.

The trustees were also apprised of the ongoing $125 million “One Thousand Days Transformed: The Campaign for Cedarville” initiative. To date, the university has secured $116.1 million in commitments for the largest comprehensive campaign in the university’s 135-year history.

The campaign is on track to reach or exceed its overall goal. Two of the four campaign components – Reducing Student Debt and Providing for the Future—have already reached their initial goals. Reducing Student Debt (scholarship initiatives) has generated $20.7 million in gifts ($15 million goal) and Providing for the Future (estate and endowment gifts) has secured $9.3 million in commitments, which is above its $7.5 goal.

Expanding Capacity (facilities) has generated $75.8 million toward the $92.5 million goal and Transforming Lives In and Out of the Classroom (student and academic initiatives) has netted $8.6 million of the $10 million goal.

Connected with the campaign was the naming of the Robert W. Plaster School of Business, which was announced publicly on Friday, Sept. 30, during the president’s annual State of the University address and at the official groundbreaking ceremony of the $40 million Lorne C. Scharnberg Business Center that same morning.

The Plaster Foundation has partnered with more than 20 colleges and universities across the United States to expand educational access and promote the virtues of the American free enterprise system through named capital projects.

Cedarville’s business school’s mission emphasizes excellence, stewardship, leadership, and kingdom influence. Its commitment to free enterprise has also been recognized by the Berry Family Foundation of Dayton. In 2021, the university announced a $1 million donation to the Scharnberg Business Center project that also established the Berry Center for Free Enterprise to be housed in the new facility.

With 550 students enrolled in 12 undergraduate programs of study, The Plaster School of Business is the second-largest academic unit on campus. The school also enrolls 86 graduate students in its Master of Business Administration and M.A. in innovation programs.

Cedarville’s financial audit, according to a report given to the trustees, received the highest evaluation possible. This is the sixth-consecutive year the audit was given an unqualified opinion with no adjustments and no findings.  This result shows Cedarville’s diligence in faithfully stewarding financial resources.

Trustees also approved the creation of a new center that will focus on strengthening churches and planting new churches. Dr. Jeremy Kimble, associate professor of theology, will serve as the inaugural director of the center. The center will seek to instill a passion for local churches and mobilize Cedarville students to advance the gospel through local church plants around the nation.

The trustees approved one new faculty member, Dr. Jonathan Arnold, associate professor of theological studies. Dr. Arnold earned his doctoral degree in historical theology from the University of Oxford and a master’s degree in pastoral leadership and systematic theology from Dallas Theological Seminary.

Located in southwest Ohio, Cedarville University is an accredited, Christ-centered, Baptist institution with an enrollment of 5,082 undergraduate, graduate, and dual-enrolled high school students in more than 175 areas of study. Founded in 1887, Cedarville is one of the largest private universities in Ohio, recognized nationally for its authentic Christian community, rigorous academic programs, high graduation, and retention rates, accredited professional and health science offerings, and the #4 national ranking by the Wall Street Journal for student engagement. For more information about the University, visit www.cedarville.edu.