Winning on Autopilot for Cedarville Engineers

A team of Cedarville University engineering students navigated its way to first place in the Autonomous Vehicle category at the 29th annual Intelligent Ground Vehicle Competition June 3-6 in Rochester, Michigan. The victorious team finished in the Auto-Nav Challenge in 5:05 to win the $3,000 prize. 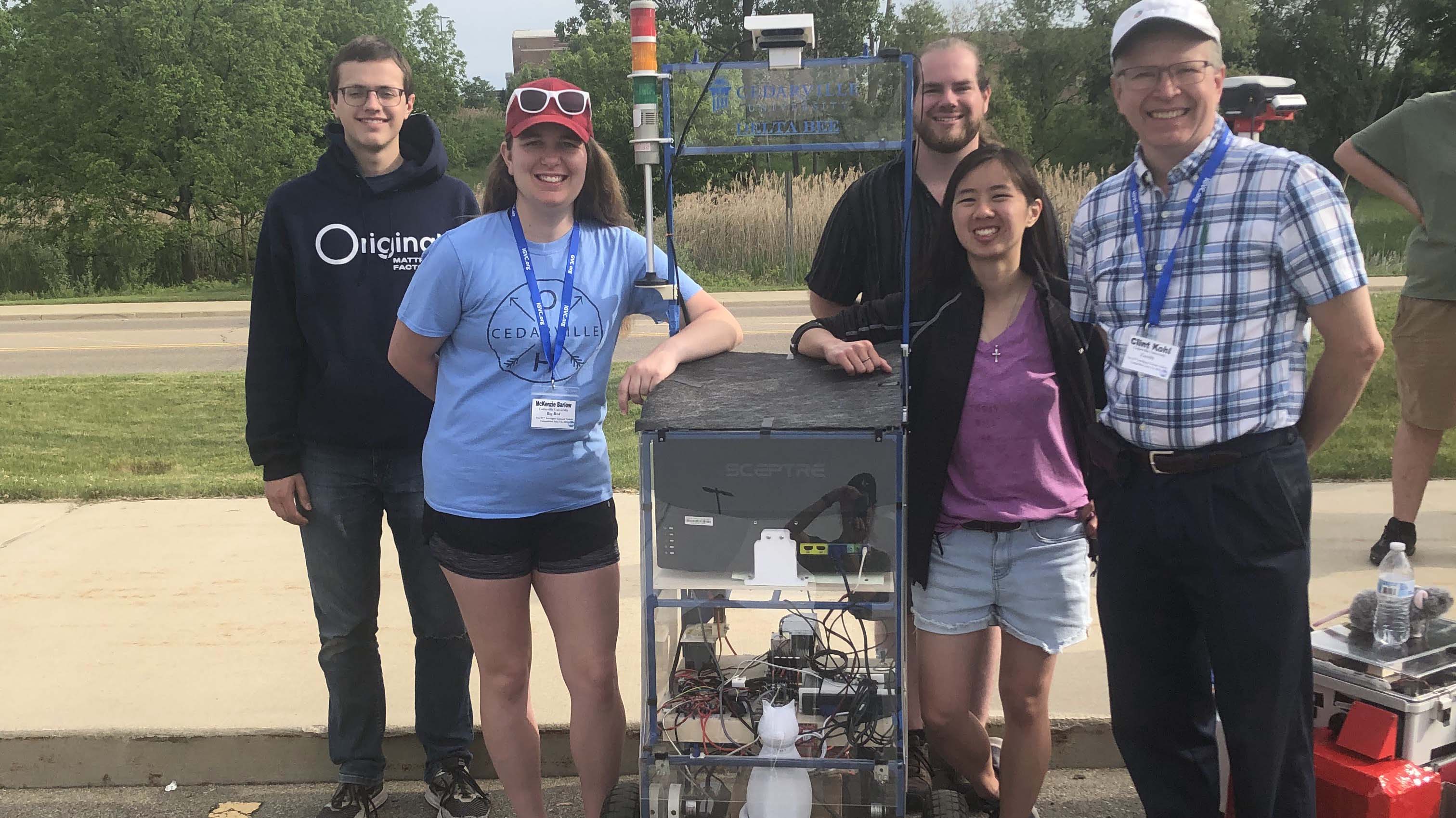 Dr. Clint Kohl, senior professor of computer engineering, advised the team of four students, all of whom graduated in May. The team included Joshua Blackburn from Mount Gilead, Ohio; Rachel Judy from Springfield, Ohio; Drew Murphy from Lower Burrell, Pennsylvania; and McKenzie Barlow from Fork, Maryland.

“Our team was composed of members with the right combination of hardware and software skills and an incredible amount of dedication and determination.”

Out of 23 teams entered in the Autonomous Navigation category, Cedarville was the second to qualify and first to finish the 525-foot obstacle course. The only other team to complete the entire course was the University of Oklahoma, last year’s champion.

The student’s objective was to prepare an unmanned ground robotic vehicle to navigate around an outdoor obstacle course in under six minutes, while maintaining a speed of 1-5 miles per hour. Judges ranked the participants based on the timed completion of the course.

The team only had one month to prepare for the competition, starting during finals week of spring semester. Despite this hurdle, the team outdid last year’s entry, which resulted in a second-place finish after a yearlong effort.

“Our team was composed of members with the right combination of hardware and software skills and an incredible amount of dedication and determination,” said Kohl. “The team was giving up their evenings after working all day at their full-time jobs. At the competition, they were the first team on the practice track in the morning and worked late. Without all that effort they never would have won.”

Located in southwest Ohio, Cedarville University is an accredited, Christ-centered, Baptist institution with an enrollment of 4,715 undergraduate, graduate, and online students in more than 150 areas of study. Founded in 1887, Cedarville is one of the largest private universities in Ohio, recognized nationally for its authentic Christian community, rigorous academic programs, including the Bachelor of Science in computer engineering, strong graduation and retention rates, accredited professional and health science offerings, and high student engagement ranking. For more information about the University, visit cedarville.edu.