Jim Mellick’s artistic expression is far more than elaborate wooden sculptures of canines with prosthetic limbs; each of his Wounded Warrior Dogs allegorizes the plight of wounded veterans by depicting man’s best friend.

His exhibit “Wounded Warrior Dogs and Other Parables” will open in Cedarville University’s Stevens Student Center art gallery on October 6 and will culminate in a closing reception the evening of Veterans Day, November 11. Mellick will attend the closing reception to talk through the stories his art represents with the veterans whose courage and sacrifice he celebrates. 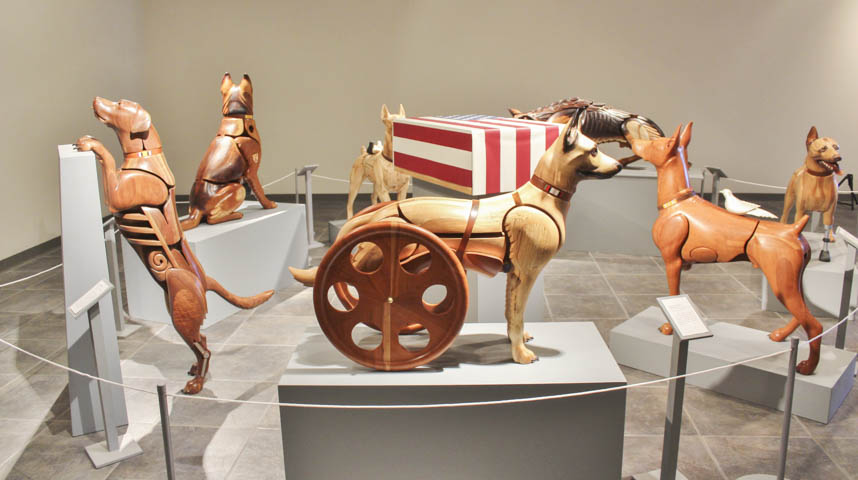 After winning the $200,000 Grand Prize by popular vote at Art Prize 2016 in Grand Rapids, Michigan, the Wounded Warrior Dogs have toured the country while being exhibited in most of the major military museums in the eastern United States.

Mellick, recipient of Cedarville University’s faculty scholarship award in 2012-2013, retired from teaching studio art at Cedarville in 2014. Since his retirement, Mellick has devoted his time and energy to his Wounded Warrior Dogs.

Though Mellick has been carving wood sculptures since 1976, and canine allegories since 1985, the Wounded Warrior Dogs sculptures are a recent project.

“In 2015, I was moved by the images of veterans returning from Iraq and then Afghanistan with amputations from the new warfare of roadside bombs and IEDs,” said Mellick.

“I wanted to remind people that military service and freedom come with a price, and we must not forget those veterans who sacrificed physical and mental health."

Mellick is not a veteran, but he is a patriot.

The sculptures are allegories for their human counterparts, so each dog in the series bears an injury – a missing leg, or a prosthesis – that appears more human than canine. Each dog’s collar displays a service ribbon representing its respective war.

Mellick’s pieces require 160-250 hours to sculpt. He employs six types of wood for different breeds, representing different wars from World War II to the global war on terror. The dogs are all life-sized or larger.

His latest series of sculptures, “K9 War Stories,” honors the sacrifice of certain K9 teams, representing the bond between dog and handler by depicting the injured or fallen dog as closely as possible in front of text on the wall behind documenting the heroic event.

“Giving form to these stories had a healing effect on the surviving handlers and was a blessing to the surviving families,” Mellick said. “I try to meet family members at museums where the story of their sacrifice is being told.”

Mellick’s exhibit has not been seen in Ohio since its successful 4-month display at the National Museum of the United States Air Force at the end of 2019.

Mellick is thrilled to be able to bring his art back to his former employer due to renovations that added an art gallery within the Stevens Student Center.

Prof. Aaron Huffman, chair of the department of art, design and theatre, is also excited about this addition. “We can now bring in professional caliber work that can be experienced by the campus body and the surrounding community,” he said.

Huffman is proud to host his friend and former colleague’s work. “Jim’s personality, passion for art, sense of humor, deep thought and excellent craftsmanship have all been missed – and we can't wait to have him back on campus in person!”

Cedarville’s exhibit will be the last chance to view the Wounded Warrior Dogs locally as Florida’s new Marco Island Art Museum has purchased the sculptures, and it will become the permanent central exhibit beginning March 2023.

His exhibit at Cedarville will also feature award-winning installations and sculptures spanning his career back to the 1980s. These other works provide a colorful context to the development of his headlining Wounded Warrior Dogs.

Mellick is grateful for the response his work has evoked. “The tears, the hugs and handshakes and the breaking of attendance records have shown that I’ve reached people profoundly,” he concluded.

“I’ve realized that the Wounded Warrior Dogs are more than a project – they are a mission.”

Located in southwest Ohio, Cedarville University is an accredited, Christ-centered, Baptist institution with an enrollment of 5,082 undergraduate, graduate, and online students in more than 150 areas of study. Founded in 1887, Cedarville is one of the largest private universities in Ohio, recognized nationally for its authentic Christian community, rigorous academic programs, including its Bachelor of Arts in Studio Art, strong graduation and retention rates, accredited professional and health science offerings, and high student engagement ranking. For more information about the University, visit cedarville.edu.