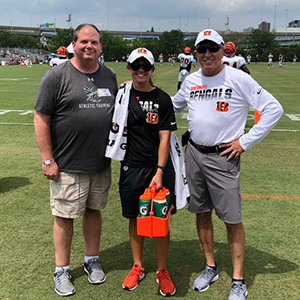 Cincinnati Bengals fans everywhere are eagerly awaiting their team’s first Super Bowl appearance in more than 30 years. But one Cedarville University alumna and a current student won’t just be watching the big game as fans, but as athletic trainers who worked with the Bengals during this championship season.

Weller’s friend and colleague Paul Sparling is the team’s head athletic trainer and because of that connection, Cedarville athletic training students have found a welcome clinical rotation site with the team.

“Our relationship with Paul and the Bengals has afforded our students opportunities to work at the highest possible level."

“Our relationship with Paul and the Bengals has afforded our students opportunities to work at the highest possible level,” Weller said. “It’s opened some doors professionally for our students. We’ve had three students go directly into the NFL.”

One of those students is Kelsey Howell, a native of suburban Detroit, Michigan who graduated from Cedarville in 2020 with a Bachelor of Arts in athletic training degree. After working with the Bengals as an intern in the 2019-20 season, she earned a fellowship with the team in 2020. She’s been with them the past two years and is the first female staff athletic trainer in the organization’s history.

“Kelsey’s a hard worker and was an excellent student,” Weller said.

Additionally, senior athletic training student Kurtis Gould from Pickerington, Ohio, has spent this season with the Bengals on a clinical rotation. He started in May 2021, and his rotation will end after the Super Bowl.

Gould worked every day during training camp, and he works two to five days a week during the school year as his class schedule allows. His responsibilities include setting up for practices and games, conducting rehabilitation with athletes, treating injured athletes and working on injury prevention. He’s had the opportunity to meet all the athletes and work at every home game, though he was prevented from going to away games due to COVID-19 travel party restrictions. This includes traveling to the Super Bowl.

“I’m very excited for the players and to be part of their success,” Gould said. “I’ve witnessed the hard work and hours they’ve put in this season, and they really deserve this opportunity to play in the Super Bowl. They’ve overcome a lot and taken the NFL by storm.”

Cedarville’s athletic training faculty typically select top students from its athletic training program and send those who are academically and clinically at the top of their class to the Bengals for interviews. The team then interviews those students and usually selects one for clinicals during the following summer and season.

“The student has to excel and be a high achiever, showing that they can handle more challenging situations and deal well with people and patients,” Weller explained.

Cedarville’s program faculty have received positive feedback from the Bengals about their students who work with the team.

“The Bengals always say that our students work very hard, they’re respectful and that they exceed the ‘Cincinnati standard,’” Weller said.

With the transition of the athletic training program to an accelerated Bachelor of Science in sport medicine + Master of Athletic Training program this summer, Weller anticipates Cedarville students will have even more opportunities to work in sports, whether that be in high schools, colleges and professionally.

Master’s students will need to complete an eight-week clinical experience during their second summer in the program. In addition to the Bengals, this may open opportunities with other NFL teams and professional organizations.

Cedarville has prepared its athletic training students for opportunities with various professional athletic teams, including the Cincinnati Bengals, Cleveland Browns, and Tampa Bay Buccaneers in the NFL, the Columbus Crew in Major League Soccer and several with minor league baseball teams.

Despite the changes, the program’s core values will remain the same.

“We’re constantly reminding our students that they’re dealing with individuals created in God’s image, not just pieces in a game,” Weller said. “They have families, and this is how they earn a living. Our students have a great opportunity to encourage and build meaningful relationships with players and coaches in their role as athletic trainers.”

Located in southwest Ohio, Cedarville University is an accredited, Christ-centered, Baptist institution with an enrollment of 4,715 undergraduate, graduate and online students in more than 150 areas of study. Founded in 1887, Cedarville is one of the largest private universities in Ohio, recognized nationally for its authentic Christian community, rigorous academic programs, including the Master of Athletic Training and Bachelor of Science in sport medicine + Master of Athletic Training programs, strong graduation and retention rates, accredited professional and health science offerings and high student engagement ranking. For more information about the University, visit cedarville.edu.