A Light in the Darkness: Cedarville Senior Spreads the Gospel in Home Country

Students at Cedarville University are encouraged to go on at least one international or domestic mission trip during their four years of college. For Angela Aad, however, missions is a way of life.

Aad is a senior pursuing a degree in molecular biology. She has always been passionate about bioethics and public health, and she would love to become a college professor. 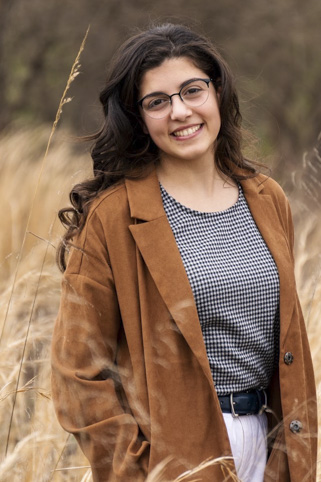 Teaching and pouring into other people seem to be common threads in Aad’s life.

Her family is from Lebanon, a war-torn country in the Middle East, just north of Israel, but they moved to Quebec, Canada, in 2008 to escape the violence in their homeland. Aad and her family still live in Quebec, but they return to Lebanon for about a month every summer, actively engaging Lebanese culture through mission work at the school Aad’s grandfather founded.

The evangelical school, founded in 1976, is open and free of charge to students of any religion, including those from Muslim, Catholic and evangelical Christian backgrounds.

When Aad’s grandfather started the school, the authorities in the area did not want him preaching the gospel, as they believed that only the Catholic church — the priests and nuns — had the right to teach anything related to Christianity. They called her grandparents heretics, which caused ostracism and persecution from the people. The primary religion in Lebanon is Islam, but Maronite Catholicism also has a strong influence in the country. Evangelical Christians are very much in the minority.

Aad attended the school as a child before they moved out of the country. As her family continued returning to help her uncle, who now runs the school, she began receiving responsibilities there.

And now, 14 years later, Aad still helps during the summer, teaching classes, chapel and games for the children. This past summer, they held Sunday night meetings at the school for parents and anyone in the village who wanted to attend, where they could hear the gospel preached.

“I have been encouraged by hearing what the Lord has been teaching a good friend of mine who got saved through the school. Seeing the impact of the school in the lives of students has meant so much to me, from lifestyle changes to actually deciding to follow Jesus.”

Aad and her cousin, Wilson Daghfal, who graduated from Cedarville University in 2022 with an IT management degree, will be leading one of Cedarville’s global outreach teams to Lebanon during the summer of 2023.

While there, the team will do many of the same things that Aad and her family have been doing for over a decade, pouring into the students in the school and sharing the hope of Christ in the surrounding community.

“A big part of what we want to do is make people aware of how the Lord is working in countries that are more closed to the gospel,” Aad said. “A lot of relief work is going on in that part of the world, and there are a lot of opportunities for mission work, whether it’s academic, humanitarian or medical.”

Located in southwest Ohio, Cedarville University is an accredited, Christ-centered, Baptist institution with an enrollment of 5,082 undergraduate, graduate, and dual enrolled high school students in more than 175 areas of study. Founded in 1887, Cedarville is one of the largest private universities in Ohio, recognized nationally for its authentic Christian community, rigorous academic programs, including its Bachelor of Science in Molecular Biology, high graduation and retention rates, accredited professional and health science offerings, and the #4 national ranking by the Wall Street Journal for student engagement. For more information about the University, visit cedarville.edu.