When Alina Leo, instructor of management in  Cedarville University’s Robert W. Plaster School of Business, left her hometown in Lithuania at age 22, she never expected to one day find a home in Ohio.

Born in Vilnius, Lithuania, which was at the time part of the Soviet Union under the rule of the Communist Party, Leo’s family lived in oppression because of their Christian faith. 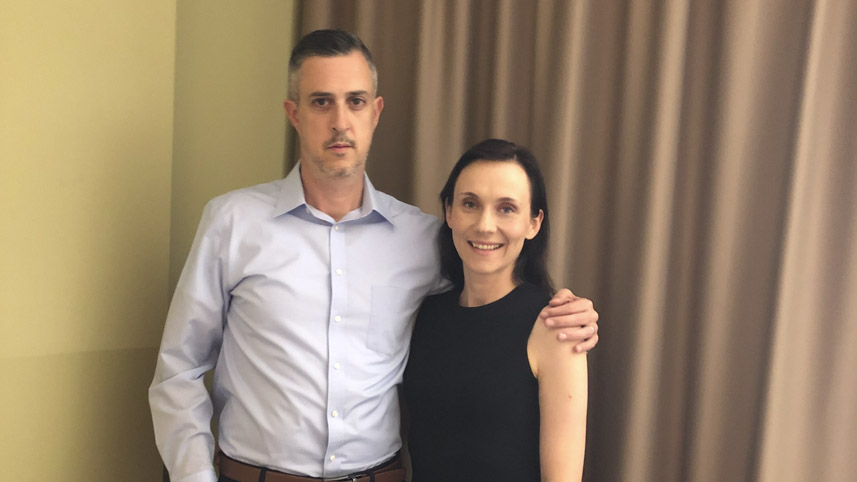 Leo’s great-grandfather was imprisoned for many years for serving as a pastor. Her grandfather, also a pastor, lived with constant threat of danger from the Communist Party as he regularly performed baptisms in a nearby river, and hiding Bibles in his home due to frequent raids. From first grade onward, Leo’s mother and aunt were frequently pulled into their school’s principal's office to be questioned about their church services.

“My family was in constant risk because of their faith,” said Leo. “My mom and my aunt had to take on the responsibility of keeping others in the church safe; as children they had to learn to be silent under questioning.”

When the Soviet Union dissolved in 1991, Leo was just 5 years old. Although the threat of jail and raids disappeared, the perceptions of Christians in Eastern Europe lingered. Growing up, Leo was told stories of the persecution her family faced, and their faithfulness despite it served as a foundation for her own faith.

“I never had to face the same threat my family did,” said Leo. “But just because the laws changed did not necessarily mean the attitude toward Christians did. I was always told by my family that I was different because I was a Christian and that I had to be prepared to be hated and persecuted. For me, it was never a matter of whether being a Christian made me safe or unsafe, but rather a question of whether I believed the gospel and if I would commit my life to Jesus.”

“I wanted to talk to other young Christians, and Stephen did, too. We prayed together and talked about the Bible and became good friends. I was not looking for a relationship, particularly not a long distance one, because I was just starting my college education.”

In 2008, Leo and Stephen married in Lithuania and moved to Berlin. Due to Stephen’s job, the pair moved to Kansas City, Missouri, a year later.

“It was incredibly lonely at first,” said Leo. “I had to leave behind my family and my culture and everything I knew. I had my two sons while living in Missouri, and we had no family around. Only through relying on the Lord, finding a good church family in Kansas City and the constant support of my husband got me through that time.”

After their eight years in the U.S., the Leo family moved back to Germany, an experience that allowed her to explore Europe and discover a passion for travelling.

“We lived in Germany for five years, and our family loved it,” said Leo. “It was only a five-hour drive to Paris, so my kids grew up going there for weekend trips, and often ask me when we are going back!”

“I never expected to end up in Ohio, but the Lord’s hand has guided my entire life and I trust his plan,” said Leo.

Leo, who received her Master of Business Administration from the University of Maryland Global Campus in 2019 and her Lean Six Sigma Green Belt Certification through the University of Cincinnati in 2021, began looking for a job. After being hired as an administrative assistant for Cedarville University’s MBA program, Leo began teaching in the Plaster School of Business in the spring of 2022.

“Teaching has always been a dream of mine!” said Leo. “When I was in graduate school, I mentored students and discovered a passion for teaching. I had been encouraged by professors who wrote me letters of recommendation to take with me — they were all convinced that teaching was something I was meant to do.”

Leo now teaches management courses and international business, a subject for which she has both a unique perspective and great passion.

“I love academia and I love students,” said Leo. “Before coming to work at Cedarville I had never thought of Christian education as an opportunity, but now I get the best of both worlds; I get to teach subjects I am passionate about and share the gospel with my students. I love having the opportunity to integrate the Bible into class, to teach students how to navigate difficult situations in a secular world.”

Now, Leo has found that Ohio is beginning to feel like home.

“Working with other professors in the school of business is like being part of a family,” said Leo. “There is a profound connection that comes from working with other Christians- the love and support they have given me is incomparable. I never would have expected to be here, but the Lord guides you where he wants you to be.”