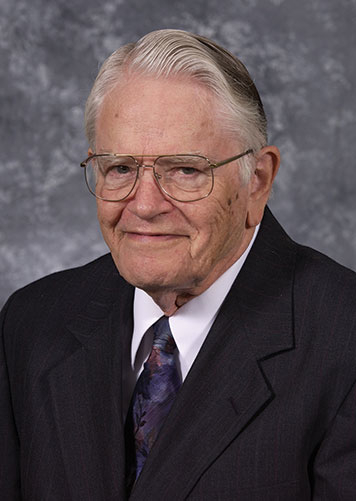 Dr. Robert Leslie Sumner, 94, of Lynchburg, Virginia, went to his heavenly home on December 5, 2016. He was born to the late Clarence and Gladys Sumner on August 3, 1922, in Norwich, NY. He accepted the Lord Jesus Christ as his personal Savior at LeTorneau Christian Camp at Canadaigua, NY, at age 17. Almost immediately, he felt the call to preach and enrolled in Baptist Bible Seminary in Johnson City, NY, where he graduated in 1943. He married the former Orphina Mingori on August 16, 1942.

He was an ordained Baptist minister and evangelist. His first pastorate was in Pontiac, IL. He later served pastorates in Long Beach, CA; Graham, TX; and Portsmouth, OH. In 1955, Dr. John R. Rice, a nationally known evangelist and editor of the Sword of the Lord newspaper invited Dr. Sumner to become Associate Editor and a staff evangelist. Later, Dr. Sumner would write the biography, Man Sent From God, about the life of this good friend and mentor. For years, Dr. Sumner wrote a column for The Sword called Sumner’s Incidents and Illustrations, which he later continued in his own paper after Dr. Rice’s death. Dr. Sumner has preached in all of the 50 states, Canada, the Philippines, Mexico, and Brazil. He always gave an invitation for people to accept Christ whenever he preached. He signed his correspondence, “Sincerely for souls.” His messages were saturated with Scripture, and he read the entire Bible through four times each year since 1946. He read through the Psalms and Proverbs each month, and read the entire Bible through hundreds of times.

He was the Founder and Editor of The Biblical Evangelist newspaper, which began in 1966 as the Regular Baptist Evangelist and thus just celebrated its 50th year. He was a prolific author of approximately 50 Christian books and booklets. A Gospel booklet he wrote, Heaven Can Be Yours, has circulated more than 2¼ million copies in English, and nearly 400,000 in a half dozen foreign languages. In the mid-1960s, he served on the Council of 14 (now Council of 18) of the General Association of Regular Baptist Churches. He was inducted into the Fundamentalist Hall of Fame at the Lucerne Conference Center in Lucerne, CA, in 1976. He was a Trustee Emeritus for Cedarville University. He received an honorary Doctor of Divinity from Bob Jones University and a Doctor of Sacred Theology from Louisiana Baptist Theological Seminary.

In addition to his parents, he was preceded in death by Orphina, his wife of 55 years, and a sister, Evelyn Maurer. He is survived by his five children: Richard (Donna), Ralph (Masami), Ruth (John Purvis), Rita (Terry Phipps), Ron (Suzanne), their spouses and grandchildren, great grandchildren, and one great-great grandchild. He is survived by his second wife, Dorothy (Tullar Holm), whom he married on March 20, 2004. He was extremely proud of his children, grandchildren, and great-grandchildren. Including Dr. Sumner’s children and his eight step-children through Dorothy, the spouses, grandchildren, and great-grandchildren bring the total family number to 126. A memorial service honoring his legacy and his Lord will be held in the Sanctuary at Timberlake Baptist Church, 21395 Timberlake Rd, Lynchburg, VA 24502, at 2 p.m. on Saturday, December 17. Dr. Paul Dixon, Chancellor of Cedarville University, will bring the message. Final interment will be at a private family ceremony at Lady Lake Cemetery in Florida, where his first wife is buried. Memorials are preferred to Dr. Sumner’s ministry, Biblical Evangelism. Please visit the Whitten Funeral Home memory page to express online condolences.