Wednesday, December 9, 2015
Cedarville University senior Jared Newman, an electrical engineering major from Pataskala, Ohio, has been awarded a scholarship from the Institute of Electrical Engineers (IEEE) Power and Energy Society (PES) for the second-straight year.

The IEEE scholarship encourages electrical engineering students to use their talents to create new power solutions in sustainable energy. The renewable energy field, which includes wind power, solar electric power, hybrid vehicles and battery technology, will continue to rapidly increase over the next several decades. Wind energy alone could support more than 600,000 jobs by 2050, according to the U.S. Department of Energy.

Newman is one of 209 recipients from around the country to win the $2,000 scholarship, which is awarded based on success in the classroom and in the field of engineering. Newman renewed his scholarship with IEEE based on completing an internship in the power and energy field, recommendation letters from faculty members and extracurricular activities. Newman recently completed his fourth season with Cedarville’s men’s soccer team, which won its third-straight Great Midwest Athletic Conference (G-MAC) championship this year and advanced to the second round of the NCAA Division II tournament.

Through assistance of the IEEE, Newman obtained a three-month internship with American Electric Power in Columbus, Ohio. AEP is one of the largest electrical utilities in the United States, servicing five million people in 11 states.

“Electrical engineering is such a broad field, but I was able to able to focus my studies on power and energy through three Cedarville classes and gain hands-on experience with power distributors, transmissions operations and power grids at my internship,” said Newman.

“Jared is an excellent example of diligence, showing excellence in both academics and sports. It paid off for him with the renewal of the IEEE scholarship,” said Brown. “I think many students can follow his lead and take advantage of this scholarship and apply as well.” 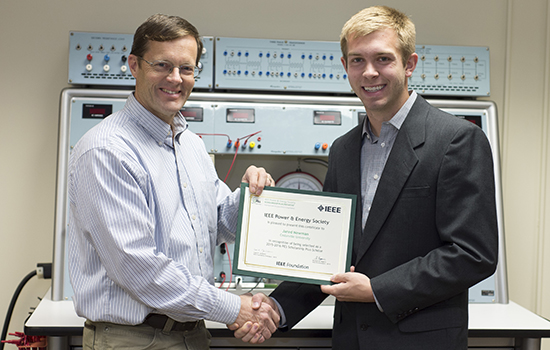