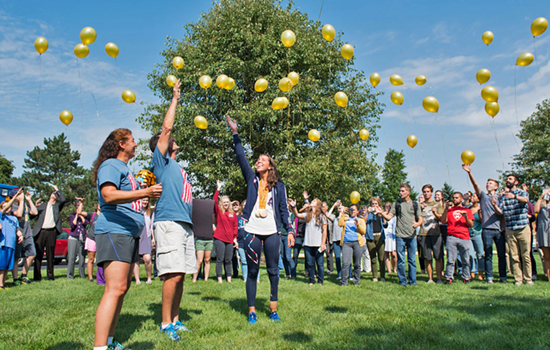 Friday, October 21, 2016
The Olympics might be over, but Grace Norman’s story continues to capture the attention of inspired followers of the Paralympic gold and bronze medalist from rural Ohio.

Norman, a freshman nursing major at Cedarville University, won the respect and adoration of many Americans when she competed in the 2016 Paralympic Games in Rio de Janeiro, Brazil. Not only did she win the triathlon and place third in the 400-meter run, but she claimed both medals within 36 hours of each other.

"Cedarville has been a huge support to me throughout the Paralympic Games."

This was an amazing accomplishment for the youngest U.S. triathlon athlete at the Games, and she is the only Cedarville University student to ever compete in an Olympic event.

“Cedarville has been a huge support to me throughout the Paralympic Games,” said Norman upon her return from Rio. “My professors were gracious enough to allow me to put my studies on hold while I was there. The love and support I received from Cedarville was incredible, and I am so grateful to be a Cedarville Yellow Jacket.”

While the start to Norman’s freshman year has been unforgettable, she’s now looking forward to becoming a normal college student. Getting back to her classes is her primary focus now, and determining what area of nursing she wants to pursue is her next objective. She will return to athletic competition later this year for Cedarville’s track team.

“I’m looking forward to figuring out what area of nursing I want to pursue because through this experience, I was able to see people with various disabilities and how they deal with them,” said Norman. “My experiences in Rio will help me be more able to give hope to those who are injured or have a similar story to mine.”

Leading up to the Paralympic Games, Norman endured 10 months of intense training. Her work paid off in many ways, including learning valuable lessons about life and helping others.

“One of the things I learned during the games was how to look at a challenge in a positive light,” said Norman. “I was so sore and tired from competing in the triathlon that there was no way I could’ve done what I did in the 400-meter dash if it wasn’t for the strength of God running through me.”

But hearing the national anthem of the United States of America helped to ease the pain.

“I will never forget the moment I stood on the medal podium with my hand over my heart and heard our National Anthem,” said Norman. “When I started singing and the tears started to come, pride in my country and an overwhelming amount of emotion came up as I realized what I had just accomplished.”

Norman’s quest for Paralympic gold literally began within the first six months of her life. She was born without her left foot and ankle and her right big toe due to Amniotic Band Syndrome (ABS). Norman’s parents – Tim and Robin – cared for their young daughter as though she had no physical issues. She had two surgeries before her first birthday and learned to walk with the assistance of a prosthetic, which was fitted for her one month after her first birthday.

Norman’s parents coached her on how to deal with struggles she faced from her condition. They also guided her athletically, which gave her the confidence to live just like anyone else and do whatever she wanted to do.

“Growing up, my body was able to adapt to using a prosthetic easily, so I was encouraged to play sports and not let anything stop me,” said Norman. “I was also encouraged to not let what others thought of me become what I thought of myself.”

Norman attributes her positive demeanor to her father, who is a professor of mechanical and biomedical engineering at Cedarville.

“My dad helped instill in me an attitude to never give up in the face of challenges. He pushed me to give my best in everything I did and to give all the glory to God,” Norman stated.

Cedarville looks forward to seeing what “amazing” Grace has in store as she studies nursing and sets her sights on the 2020 Paralympics in Tokyo.

Located in southwest Ohio, Cedarville University is an accredited, Christ-centered, Baptist institution with an enrollment of 3,760 undergraduate, graduate, and online students in more than 100 areas of study. Founded in 1887, Cedarville is recognized nationally for its authentic Christian community, rigorous academic programs, strong graduation and retention rates, accredited professional and health science offerings, and leading student satisfaction ratings. For more information about the University, visit cedarville.edu.