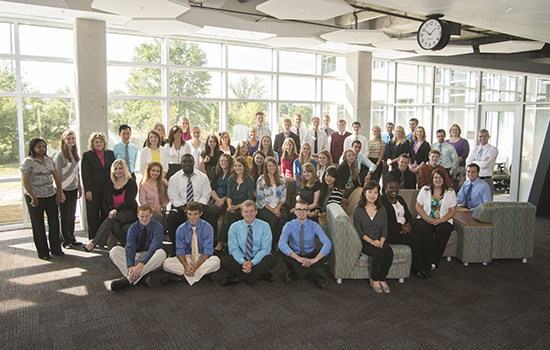 History in the Making for Pharmacy Graduates

Tuesday, May 3, 2016
A group of students at Cedarville University is set to make history when they become the first graduates from the school of pharmacy. It’s an event that has been a decade in the making and represents countless hours of hard work by those who first envisioned a pharmacy program at Cedarville.


Marc Sweeney, Pharm.D., dean of the school of pharmacy, is one of the program’s pioneers and is excited about the future of the school’s first graduates, which total 48 students. The group will be recognized during Cedarville's 120th commencement on Saturday, May 7, as well as during a special school of pharmacy ceremony on Friday, May 6.

“This year’s class is an extremely ambitious, risk-taking group of students who will rise to leadership in their field very quickly,” said Sweeney. “I also believe they truly desire to glorify God with their skills and see their profession as a way to contribute to the Kingdom of God.”

It’s an exciting time for Sweeney and others who have been with the program since its initial planning phases, which began in 2006.

“We spent several years vetting candidates for faculty positions and investigating how pharmacy would impact Cedarville’s overall mission and vision,” said Sweeney. “Eventually, we made the decision to move forward at a time when it was difficult to build a school of pharmacy from the ground up.”

Since accepting its first group of students in 2009, the Cedarville University School of Pharmacy has seen tremendous growth, including the construction of the $22.5 million Health Sciences Center in 2010.

In addition to some of the finest facilities in the country, the school of pharmacy has also had great success among its students. This includes 79 percent of Cedarville’s pharmacy students who applied for a residency being admitted to a program. The national average is 66 percent.

“This is a class of go-getters, and they have shown that throughout their time here,” said Elizabeth Ford, director of community engagement for the school of pharmacy. “We know they will be highly successful in their careers.”

This year’s graduates have earned spots in prestigious residency programs at places like Nationwide Children’s Hospital in Columbus, Ohio, and the world-famous Mayo Clinic in Rochester, Minnesota, and believe that Cedarville’s program has prepared them well for the challenges ahead.

“Our professors are invested in us and want to see us succeed,” said Josh Arnold, a graduate who will serve in a residency at the Mayo Clinic. “They have done an excellent job teaching us not just textbook information, but skills that will help us apply that knowledge to care for our patients effectively and compassionately.”

Kasandra Chambers, a graduating student from Covington, Kentucky, will head to Nationwide Children’s Hospital for her residency, and she feels that Cedarville has had a profound impact on her future.

“I took a leap of faith in coming to Cedarville for what was, at the time, a new pharmacy program,” said Chambers. “Looking back at my time here, I can guarantee I would not have become the bold, confident, Christian, soon-to-be pharmacist that I am at any other program.”

Sweeney noted that while this year’s graduates have tremendous opportunities in front of them, they also know that their career path represents an incredible ministry opportunity,

“The career opportunities for our graduates look phenomenal. It’s not a matter of landing a job, it’s more a matter of deciding which job to choose from,” said Sweeney. “It’s important to remember, however, that every patient in the health care system has a physical need, and wherever you have a physical need, there’s an opportunity to talk about our broader need for God.”