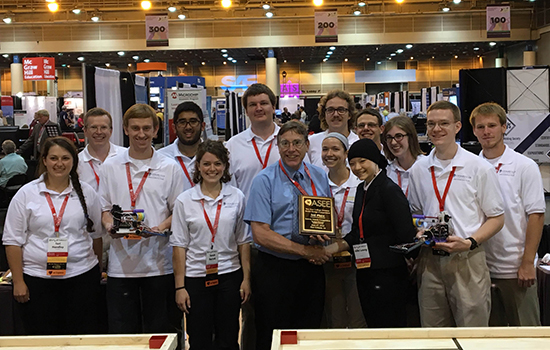 Wednesday, July 13, 2016
A team of freshman and sophomore engineering students from Cedarville University placed third at this year’s Model Design Competition at the American Society of Engineering Education (ASEE) Conference, which was held in New Orleans June 26-29.

More than 20 teams from around the country participated in the annual competition, which Cedarville had won in each of the previous three years.

This year’s competition required teams to design and build autonomous robots capable of depositing one ring in each of 12 boxes located along the “parade route” on a specified track.

Teams earned points based on their robot’s success in four runs through the course as well as the quality of their exhibit, which included a poster presentation.

Cedarville earned the highest exhibit score (111.99 points) and finished third in the course testing score (405.02 points) to finish with a total of 517.01 points. A pair of teams from Tidewater Community College finished in first and second place, with Cedarville just 12.27 points short of finishing in second.

Cedarville’s team used dual-robots named “Sonic” and “Tails” to navigate the course this year and posted two successful runs, with a top time of just under 26 seconds.

“The Lord was very gracious to us in allowing us to rebound from a very bad first run in which one of the robots got stuck and a second run in which we missed one of the rings,” said Clint Kohl, Ph.D., professor of computer engineering. “However, the team persevered and finished with two successful runs. We ended up as the fastest team, just not the most consistent.”

The Autonomous Robotics Competition combines electrical, mechanical and computer engineering, as well as computer science elements, making it a great learning experience for competitors in all engineering disciplines.

Robots were given a maximum of 90 seconds in each of their four allotted runs. A run was considered successful when all 12 rings were deposited into their respective boxes.