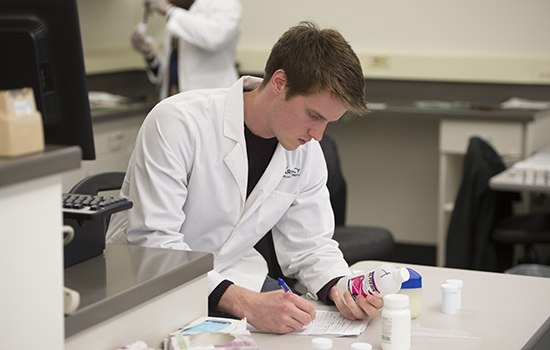 Monday, August 29, 2016
Cedarville University’s School of Pharmacy has received full accreditation status from the Accreditation Council for Pharmacy Education (ACPE). The official notification, received Monday, July 11, makes Cedarville one of 130 professional pharmacy school in the nation — and the only one in the Dayton area.

“This is a significant achievement for Cedarville University,” said Marc Sweeney, Pharm.D., dean of the school of pharmacy. “Launching and establishing an accredited Doctor of Pharmacy program is challenging and requires a significant amount of resources and expertise.”
The accrediting organization cited many reasons for the strong accreditation statement, including that the pharmacy students are “the strength of the program,” are “game-changers,” and are professional, articulate, motivated, and passionate about the program. ACPE commended Cedarville’s School of Pharmacy for its mission of addressing needs of the underserved through service learning, including local and international missions.

"I particularly want to thank Dr. Bill Brown, the Trustees, and the leadership team which had the vision to launch the school of pharmacy. Dr. Marc Sweeney has provided insightful and steady leadership for eight years in bringing the school this significant recognition."

Also, according to ACPE, Cedarville’s School of Pharmacy expects to include innovative, entrepreneurial, and revenue-generating programs in the future. These include a soon to be up-and-running MTM Telepharmacy Center, and a pharmacy care clinic for the underserved in the Pharmacy School.

“We believe that Christian pharmacists can play a significant role in serving all people in the health care system because they are motivated beyond their own individual achievements,” said Sweeney.

And, with a total population of 11.5 million in Ohio — the seventh highest in the country — Cedarville’s pharmacy graduates are positioned well to meet the growing need for competent, professional pharmacists in the Buckeye state.

For all schools, accreditation is a multi-year process. Each school is required to graduate its first professional students before ACPE may grant accreditation to the program. Cedarville University’s inaugural pharmacy commencement, with 48 students, took place May 7, 2016.

In this class, 79 percent of the graduates who applied for residency were matched with a program (the national average is 66 percent, according to the American Society of Health System Pharmacists).

Also, all of the graduates were either hired by pharmacy companies, like CVS and Walgreens, various hospitals and health-systems, or pursued postdoctoral residency programs at some of the nation’s top hospitals, including the Mayo Clinic in Rochester, Minnesota, and Nationwide Children’s Hospital in Columbus, Ohio.

“The process was lengthy and challenging, which sometimes affects the workload and morale of everyone involved,” said Sweeney. “In our case, we have been very fortunate to have such a great group of faculty, staff and students to carry us through to success.”

A complete explanation of the ACPE’s evaluation method can be found by visiting www.acpe-accredit.org/pharmd-program-accreditation.

"I particularly want to thank Dr. Bill Brown, the Trustees, and the leadership team which had the vision to launch the school of pharmacy," said Cedarville president Dr. Thomas White. "Dr. Marc Sweeney has provided insightful and steady leadership for eight years in bringing the school this significant recognition."

Currently there are 291 students enrolled in the pharmacy program at Cedarville University; 174 are in the professional program.