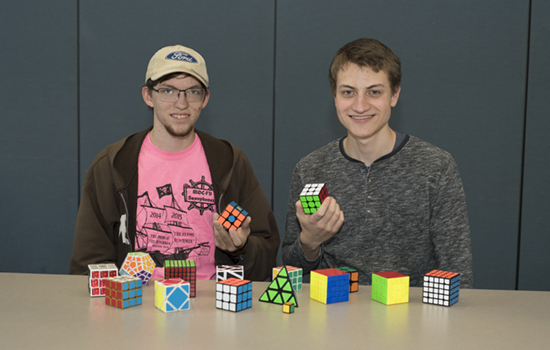 Camillone, a freshman mechanical engineering major from Shoreham, New York, developed an interest in the Rubik’s Cube in 2008 as a fun hobby. For the past four years, he’s honed his skill at speed cubing by competing in six different Rubik’s Cube competitions, including the 2014 US Nationals.


“It was cool hanging out with so many different people that are learning the same thing I am,” he said about his latest competition, where he placed fourth in the blindfolded competition, sixth in the 4x4 and eighth in the 5x5. The numbers signify the number of individual blocks on the cube.

He enjoys the competitions because they give him a chance to beat his own time. Camillone’s best official time for the 3x3 cube is 9.75 seconds, but his best non-competition time is 6.63 seconds.

Mortenson, a junior broadcasting and digital media major from Orange City, Iowa, took up cubing in 10th grade as a way to entertain himself on long bus rides for band trips. His father had a slow, but effective method to solve the 3x3 cube, but when Mortenson’s older brother got a newer cube with instructions for a faster method, Mortenson knew he’d found his hobby.

“It’s a unique thing that I just happen to be into, and it’s a lot of fun,” Mortenson said.

Mortenson is also involved in many other activities at Cedarville, including Resound Radio, Men’s Glee Club and Filmgate, a student-led film organization, as well as the worship team at his church. Camillone enjoys playing the bass trombone in Cedarville’s orchestra and symphonic band.


Located in southwest Ohio, Cedarville University is an accredited, Christ-centered, Baptist institution with an enrollment of 3,760 undergraduate, graduate, and online students in more than 100 areas of study. Founded in 1887, Cedarville is recognized nationally for its authentic Christian community, rigorous academic programs, strong graduation and retention rates, accredited professional and health science offerings, and leading student satisfaction ratings. For more information about the University, visit www.cedarville.edu.