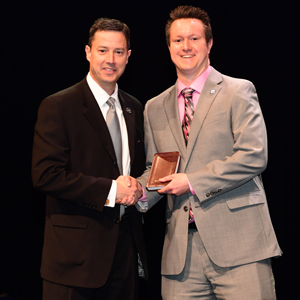 Duerr’s first media interview didn’t happen right away. In fact, it took about 18 months before he was asked to share his international studies expertise with a television station. But since that first interview, he’s averaged more than 70 interviews a year.

“Whether the audience is small or large, I really enjoy the opportunity to discuss a complex subject and to accurately explain information to the public,” Duerr said.

His 500th interview was with a Dayton-area television station, speaking on the Russian COVID-19 vaccine, nicknamed “Sputnik-V,” referencing the Sputnik satellite launch in 1957.

“Whether the audience is small or large, I really enjoy the opportunity to discuss a complex subject and to accurately explain information to the public."

Duerr has spoken to various media outlets throughout Ohio and around the United States on international topics such as the coronavirus, Brexit and the North Korean Singapore Summit in 2018 and Hanoi Summit in 2019.

”I’ve done nearly 50 interviews on the topic of Brexit and many others involving nuclear weapons or missile tests, which are very delicate and diplomatic issues,” Duerr said. “I have to communicate these things clearly, including the pros and cons and what’s at stake.”

He even had the opportunity, because of media connections, to take part in a documentary created by a media outlet in Iran. This documentary detailed the signing of the North American Free Trade Agreement (NAFTA), specifically looking at the United States and its role in international agreements. He had the opportunity to speak positively about democracy and the  United States without the media outlet censoring anything he said.

Duerr’s interviews not only provide insight into international stories that we see on a regular basis, but they also impact his students.

“I think my students do a tremendous job in sharpening me by how they interact in class and ask great questions,” Duerr said. “It’s very common for students to ask me challenging questions that force me to reflect and determine the best response. I’ve used these opportunities to help prepare me for live media interviews, whether those are on TV, radio or print.

“From talking with the media from around the country, I’ve learned just how valuable and helpful Dr. Duerr is regarding international stories,” said Mark D. Weinstein, executive director of public relations. “Dr. Duerr has the unique ability to break down a complicated story and communicate information in a way that is understandable for everyone who is listening. He’s a gifted communicator and a tremendous asset to Cedarville University.”

Located in southwest Ohio, Cedarville University is an accredited, Christ-centered, Baptist institution with an enrollment of 4,380 undergraduate, graduate and online students in more than 150 areas of study. Founded in 1887, Cedarville is recognized nationally for its authentic Christian community, rigorous academic programs, including the Bachelor of Arts in international studies program,  strong graduation and retention rates, accredited professional and health science offerings and high student engagement ranking. For more information about the University, visit www.cedarville.edu.