To listen to Pete and Chris Reese's podcast, click on the play button below: 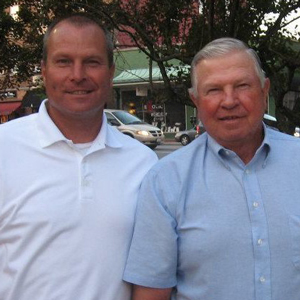 If anyone ever makes a movie about Pete and Chris Reese, “Like Father, Like Son,” would be a really good title.

Pete still holds records for shooting (7th all-time) and rebounding (8th all-time) at Cedarville from his days as a Yellow Jacket hoops star in the late 50s and early 60s. His son, Chris, followed dad on the hardwood as a standout forward and charity stripe sure shot.

After a Hall of Fame career teaching, coaching, and developing the athletic facilities at Los Angeles Bible College, which is now The Master’s University, Pete came back to his alma mater and served as a coach and Athletic Director and supervised the University’s outdoor athletics complex till 2017 when he retired.

“It’s wonderful to have your son follow you in whatever profession you’ve been in."

Chris served as Head Men’s Basketball Coach and Athletic Director at Oklahoma Wesleyan University and Multnomah Bible College before he returned to Cedarville. He has served faithfully as Associate Athletic Director and took the reins from dad as Supervisor of Outdoor Athletic Facilities. And now it’s Pete working for his boy when grass-cutting season commences.

Both Pete and Chris were humbled by the recent honor bestowed on Pete and Pete’s brother, Gene, for whom the outdoor complex was recently named, recognizing their work developing Cedarville’s playing and practice fields.

“It’s a privilege to maintain facilities that your father and uncle built and maintained for years,” notes Chris during the podcast. “It inspires me and motivates me to do the best job I can.”

“It’s wonderful to have your son follow you in whatever profession you’ve been in,” Pete adds. “Chris is meticulous in what he does.”

To listen to other Cedarville Stories podcasts, click on the link below:

Located in southwest Ohio, Cedarville University is an accredited, Christ-centered, Baptist institution with an enrollment of 4,550 undergraduate, graduate and online students in more than 150 areas of study. Founded in 1887, Cedarville is one of the largest private universities in Ohio, recognized nationally for its authentic Christian community, rigorous academic programs, including its Bachelor of Arts in Health and Physical Education program, strong graduation and retention rates, accredited professional and health science offerings and high student engagement ranking. For more information about the University, visit www.cedarville.edu.