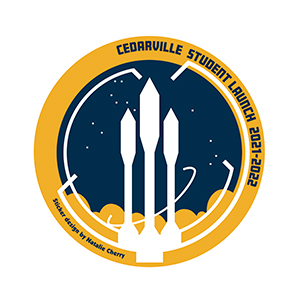 Students from the Cedarville University School of Engineering and Computer Science are set to compete for the first time in the NASA Student Launch competition this April. To prepare for the competition, team members plan to launch a subscale rocket on December 12 or 13, with plans for a few backup launch days the following week.

NASA requires every student team to test launch at least one subscale rocket, which cannot be larger than 75% of the size of the planned final rocket. Cedarville’s team members will launch their subscale rocket on the afternoon of December 4 from the Wright Stuff Rocketeers’ launch site, located at 5995 Federal Road in Cedarville. The launch site has Federal Aviation Administration (FAA) approval, which is required to launch rockets above a certain altitude.

“When you test, you learn things you hadn’t thought of before.”

According to senior mechanical engineering major and team leader Chad Sanderson of North Huntingdon, Pennsylvania, the subscale rocket will be a simplified and smaller version of  “Forerunner,” the rocket the team will launch in April. Team members will work to make sure the fins and motor retention systems, among other parts of the planned rocket, work as planned. They will also be watching the rocket’s recovery system carefully.

“We definitely need to test the recovery system, because it literally makes or breaks your rocket,” Sanderson said. “It’s great to test it on the ground, but things can be really different in the air because you have different pressure.”

The subscale rocket launch is the next phase of a nearly nine-month process. The team submitted a large report to NASA earlier in November. Following the subscale launch, the team will need to submit another report to NASA by early January, providing analysis and finalizing the design. Because the team’s senior engineering students are competing as part of their senior design project, they will also need to present about their project for the school. After that, the team plans to spend most of the spring semester finishing the full-scale rocket design and beginning construction of “Forerunner.”