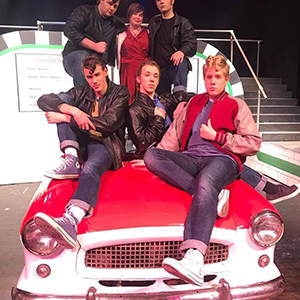 When Jay Kinsinger’s son needed a stage prop car for his high school production of “Grease,” he never would have imagined that the rusted-out 1957 Nash Metropolitan would be drag racing only two years later. But, for Cedarville University’s Engineering Senior Design Grassroots Racing team, the empty car body offered the perfect starting point for its race car.

The Grassroots Motorsports $2,000 Challenge was held in Gainesville, Florida, on October 22-23, and included 37 teams from across the nation. All of the cars in the competition were developed for less than $2,000. The competition includes three categories: drag racing, autocross, and Concours de Elegance, which evaluates a car’s appearance. Each category was ranked individually and then compiled to give an overall ranking for each of the 60 teams.

“It sat for so long that I saw an opportunity for a cheap car body and presented it to the team. It presented many challenges, but the team was up for it.” 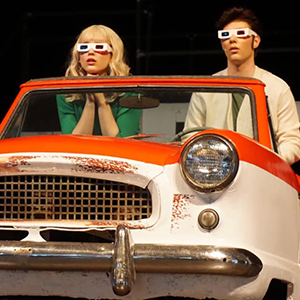 Cedarville’s race car, jokingly dubbed the Nash Potato by the team, took second place among the college bracket and ranked fourth overall in the Concours de Elegance competition for vehicle appearance. In addition, Cedarville’s team will be featured in an upcoming issue of Grassroots Motorsports magazine.

This was Cedarville University’s first year competing. Due to the race falling in October, this year’s six-member team of seniors continued work previously done by last year’s senior design team.

“The plan as of now is to put each car body through two competitions,” explained Kinsinger, associate professor of mechanical and biomedical engineering. “Because the competition is in the fall, each senior design team will race a car in the fall and then fine-tune in the spring semester, so this is the work of two years of student design.”

“Even in perfect working conditions, the Nash Metropolitan was never really meant to go over 60 miles per hour, which is not ideal for racing."

To build a car for under $2,000 requires extreme ingenuity, and for Cedarville’s team, it involved hitting the scrap heaps to build a functioning vehicle.

“When the stage prop car for “Grease” at Cedarville High School was not needed, no one really knew what to do with it,” said Kinsinger. “It sat for so long that I saw an opportunity for a cheap car body and presented it to the team. It presented many challenges, but the team was up for it.”

Without a working engine or suspension, the team faced even greater challenges than simply repairing the external body of the car. The team pulled off what Kinsinger described as an “engineering feat.”

“Even in perfect working conditions, the Nash Metropolitan was never really meant to go over 60 miles per hour, which is not ideal for racing,” said Kinsinger. “Our team was able to race over 80 miles per hour after a full engine reconstruction.”

The team purchased a 1994 Honda Civic engine to place in their vehicle. However, complications set in when the team realized that the old Nash was designed for rear-wheel drive with mid-to-back engine placement, while the Honda Civic’s suspension was tailored for front-wheel drive and front engine placement. To make the engine compatible with the Nash, the team had to redesign the suspension, an arduous task taken on by ChanWoo Chung, who graduated in 2021.

“Charlie was on last year’s senior design team,” said Kinsinger. “He took it on himself to learn LOTUS, the software program used in designing suspensions on race cars. Alongside the software was the actual issue of engineering an entirely new suspension to merge two cars into one.”

With the extreme difficulty of the project, this year’s senior design team worked until the last minute.

“We drove the car for the first time loading it onto the trailer!” said Kinsinger. “It was nerve-wracking to go into a race with a car that was completely untested. It was ultimately the team’s decision to attend, and I am glad that we did. It was a wonderful learning experience.”

“Even though our car was not the fastest racer, the engineering and design put into the car was exceptional,” said Kinsinger. “The Grassroots magazine recognized the work these students put in and the engineering feat they pulled off!”

Located in southwest Ohio, Cedarville University is an accredited, Christ-centered, Baptist institution with an enrollment of 4,715 undergraduate, graduate, and online students in more than 150 areas of study. Founded in 1887, Cedarville is one of the largest private universities in Ohio, recognized nationally for its authentic Christian community, rigorous academic programs, including the Bachelor of Science in mechanical engineering, strong graduation, and retention rates, accredited professional and health science offerings, and high student engagement ranking. For more information about the University, visit cedarville.edu.