Livestreamed Interview on Patriotism and the Bible 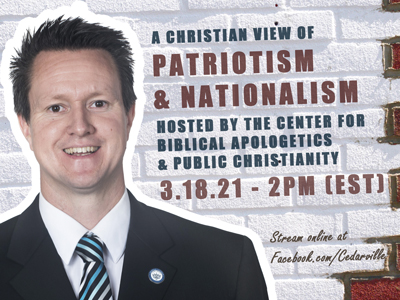 Cedarville University’s Center for Biblical Apologetics and Public Christianity will host “A Christian’s View of Patriotism and Nationalism,” a seminar with Dr. Glen Duerr, associate professor of international studies.

The seminar will be livestreamed on March 18 at 2 p.m. Watch the livestream on Cedarville’s Facebook page.

"It's hard to imagine a more divisive or pressing issue in the church in North America than how to cultivate a winsome witness in such a politically divided time,” said Dr. Dan DeWitt, director of the Center for Biblical Apologetics and Public Christianity and associate professor of applied theology and apologetics.

Scripture provides specific descriptive and prescriptive examples of how to live in a globalized, 21st-century world.” 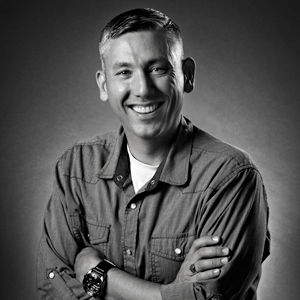 Political issues impact close friendships and family relationships, DeWitt noted. Thinking about patriotism and even nationalism is no longer something optional for Christians.

“These are topics that come up as close to home as the dinner table,” continued DeWitt. “That's why I'm thrilled to interview Cedarville University's very own Dr. Glen Duerr, who has not only expertise on the issue but also a heart to serve God's people."

The discussion will focus on Duerr’s book “Patriotism and the Cross: A Theology of Nationalism,” which was published in December 2020. Topics covered will include multiple national identities; supranationalism, national governments forming institutions and policies for all parties; secessionist movements; and the transnational connections of the Christian faith.

“I want Christians to think through what the Bible says about issues of nationality,” said Duerr. “Most people have ideas about nationalism and patriotism, but is there a difference between the two? Yes, but it is far more complex than most imagine. Does the Bible provide answers on how to live in the 21st century? Absolutely, Scripture provides specific descriptive and prescriptive examples of how to live in a globalized, 21st-century world.”

Located in southwest Ohio, Cedarville University is an accredited, Christ-centered, Baptist institution with an enrollment of 4,550 undergraduate, graduate, and online students in more than 150 areas of study. Founded in 1887, Cedarville is one of the largest private universities in Ohio, recognized nationally for its authentic Christian community, rigorous academic programs, including its Bachelor of Arts in Biblical Studies and its Bachelor of Arts in International Studies, strong graduation, and retention rates, accredited professional and health science offerings, and high student engagement ranking. For more information about the University, visit www.cedarville.edu.