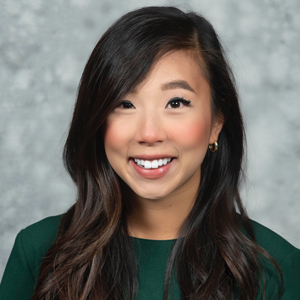 Stephanie Wu, a fourth-year professional pharmacy student from Peoria, Illinois, is the first Cedarville University student from the school of pharmacy to be accepted into an industry fellowship program.

Wu will graduate from Cedarville this May and then will start her fellowship with Sanofi Genzyme, one of the largest pharmaceutical companies in the country. She will serve on their immunology and medical science liaison team starting July 1.

“The statistics say that less than 15% of graduating pharmacy candidates who apply will receive an industry fellowship,” said Wu. “I faced a lot of rejection before I got a positive answer, but it only takes one yes. I got a lot of no’s, but it took one yes for me to get my dream job.”

“I realized that immunology works to combat diseases that are in our backyard and is a great way to serve people in our country and in the world.”

After 60 hours of interviewing with multiple companies, Wu landed the fellowship with Sanofi Genzyme to work in immunology.

Most pharmacy graduates pursue residencies in hospitals after graduation. Instead, Wu wanted to enter the pharmaceutical industry, something no Cedarville graduate had ever accomplished.

In addition to her Doctor of Pharmacy degree, Wu also pursued an MBA at Cedarville, which helped her land the Sanofi Genzyme fellowship because it showed that she had “a business-focused scientific mind.” Wu finished her MBA in August 2020.

When she began applying for fellowships, Wu submitted an application to over 23 companies that ranged from large to small, but ultimately Wu wanted a fellowship with a large company specializing in immunology.

“At Cedarville, I had many friends that wanted to go into medical missions, but I never felt that was my calling,” said Wu. “I realized that immunology works to combat diseases that are in our backyard and is a great way to serve people in our country and in the world.”

Located in southwest Ohio, Cedarville University is an accredited, Christ-centered, Baptist institution with an enrollment of 4,550 undergraduate, graduate, and online students in more than 150 areas of study. Founded in 1887, Cedarville is recognized nationally for its authentic Christian community, rigorous academic programs, including its Doctor of Pharmacy program, strong graduation and retention rates, accredited professional and health science offerings, and high student engagement ranking. For more information about the University, visit www.cedarville.edu