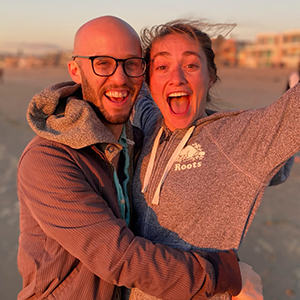 All educators know that the first year of teaching is the hardest. But for two recent Cedarville University hires, that first-year struggle has also come with a life-changing perk.

Mackenzie Davies, instructor of civil engineering, and Caleb Booth, assistant professor of studio art, are engaged to be married on June 28, 2021. The two met at new faculty orientation in August 2020, and the rest is history.

Before even meeting, though, Davies and Booth had to walk through their own complex journeys to arrive at Cedarville.

“I didn’t think I’d teach at a university,” Davies said. “When I was finishing my graduate work at Purdue, I lined up an engineering position in Florida, but then Dr. Ayers [Stephen Ayers, professor of civil engineering at Cedarville] called me and convinced me to apply to Cedarville.

"I believe we are reaping some seriously wonderful benefits of obeying even when it's nearly impossible to understand the path ahead. We have truly been blessed.”

"It took the entire interview process for me to really be sure, but God kept opening doors and softening my heart to this position. I saw that it was where he wanted me.”

“I was pretty set in New York, and I’d been there for six years, but God closed so many doors my last year in the city,” Booth shared. “A gallery I worked at shut down, my church closed permanently and then the pandemic hit, so I lost my part-time job. When I sent my application to Cedarville, it was the only place I even got a response from.”

Davies was offered a position at the university in early March 2020, and she moved to Cedarville just three days after accepting. Booth’s hire was within 10 days of faculty orientation.

“When I showed up at orientation, everyone knew I was new and still didn’t have anywhere to live,” Booth explained. “Mackenzie followed up with me about a landlord I’d been talking to, and we found out we’d have the same landlord in the same apartment building. She drove me to the complex after work to show me around and introduce me.”

“I was just trying to be hospitable at that point,” Davies said. “His stuff hadn’t arrived from New York yet — and didn’t for three weeks — so I tried to help out. I let him use my air mattress and offered to cook him a meal.”

As the two adjusted to teaching, they bonded over their first-year struggles and began a friendship.

“We started hanging out after work,” Booth explained. “Since we were in the same apartment complex, we’d text one another: ‘I’m just grading if you want to come upstairs.’ We’d cook dinners together, too.”

The two officially started dating on October 11, 2020, and they were engaged a few months later on December 29.

As for the addition of a relationship to an already hectic year, the two say that having one another has helped ease daily stressors.

“Our relationship has made first-year teaching easier because we each have a buddy,” Davies said. “We have wonderful colleagues, but they’re far more experienced than we are. Having Caleb alongside me has given me a partner to struggle through new things with.”

Davies and Booth are both reminded of the significant role that their faith has played in their relationship, especially through the winding paths that led them to Cedarville and one another.

“God has been in control, and neither of us would be at Cedarville without his hand at work,” Davies shared. “There are so many things that lined up so that Caleb and I would have a chance to meet and fellowship. I believe we are reaping some seriously wonderful benefits of obeying even when it's nearly impossible to understand the path ahead. We have truly been blessed.”

And so, after a year of transition and change, the couple is excited to tie the knot.

"It will be a sweet moment of culminating, of bringing our lives together,” Booth said.

Located in southwest Ohio, Cedarville University is an accredited, Christ-centered, Baptist institution with an enrollment of 4,550 undergraduate, graduate, and online students in more than 150 areas of study. Founded in 1887, Cedarville is one of the largest private universities in Ohio, recognized nationally for its authentic Christian community, rigorous academic programs, including the Bachelor of Arts in Studio Art and Bachelor of Science in Civil Engineering programs, strong graduation, and retention rates, accredited professional and health science offerings, and high student engagement ranking. For more information about the University, visit cedarville.edu.