Seeking A Connection Between Protein Mutations and Epilepsy 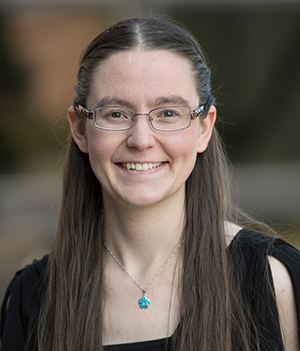 A Cedarville professor is zeroing in on the connection between a protein in the human body and its connection to a form of epilepsy. Her findings were recently published online in the research journal “Structure,” and the article will appear in print in October.

Dr. Sharon Cooper, an assistant professor of biology in Cedarville’s department of science and mathematics, has spent nearly a decade trying to understand the relationship between mutations in the protein protocadherin-19 (PCDH19) and PCDH19 clustering epilepsy.

PCDH19 clustering epilepsy most often, though not exclusively, occurs in young girls. It starts between birth and age 5 and generally ends around puberty, though sometimes it can continue later, and is so named because the resulting seizures often come in clusters.

"Hopefully, we can develop better treatments for this particular form of epilepsy and, potentially, understanding it better could provide insight even into other brain disorders."

“They may have a bunch of seizures in close proximity and then they might go several months, or even a year, without having any seizures,” Cooper explained.

Even after the seizures go away, other complications of this epilepsy syndrome may persist, such as mental impairment.

As part of her efforts, Cooper worked with Jonathan Hudson, who graduated from Cedarville in 2020 with a degree in molecular and cellular biology, and two other researchers to study mutations in PCDH19.

Cooper served as the principal investigator and the journal’s contact, while Hudson served as first author and helped analyze a lot of the data. The other researchers were Dr. Marcos Sotomayor of The Ohio State University, who was Cooper’s Ph.D. advisor, and Elakkiya Tamilselvan, who is studying under Sotomayor.

Cooper and her team used X-ray crystallography to identify two unique regions on PCDH19. One of them, a mutation cluster in a section of the protein called EC6, contains a series of mutations affecting the outward-facing surface of the protein. Cooper said these mutations could possibly prevent PCDH19 from binding to nearby proteins and therefore disrupt cell adhesion, a process that ensures neighboring cells will stick to one another and not leave gaps. When cell adhesion is disrupted, a disease such as epilepsy would result.

Cooper said that they will need further studies to determine precisely which proteins interactions are disrupted, leading to altered cell adhesion and epilepsy

In the course of their research, Cooper and her team also identified a hydrophobic region within a section of the protein called EC5. Normally, EC5 is hydrophobic, which means it repels water. She said that this is unusual for the outer surface of a protein because proteins are generally submerged in a liquid environment. This may indicate that these regions of the protein bind to other hydrophobic proteins or substances. Cooper wants to do more research to see what effects a mutation in EC5 would have on PCDH19, especially a mutation that would take away the hydrophobic properties.

Cooper began studying the relationship between epilepsy and PCDH19 while she was starting her Ph.D. program.

“Right now we're just trying to understand how the protein functions normally and then how it might be misfunctioning in the disease,” Cooper said. “Hopefully, if we understand that, then we can develop better treatments for this particular form of epilepsy and, potentially, understanding it better could provide insight even into other brain disorders.”

Located in southwest Ohio, Cedarville University is an accredited, Christ-centered, Baptist institution with an enrollment of 4,715 undergraduate, graduate, and online students in more than 150 areas of study. Founded in 1887, Cedarville is one of the largest private universities in Ohio, recognized nationally for its authentic Christian community, rigorous academic programs, including the Bachelor of Science in biology program, strong graduation and retention rates, accredited professional and health science offerings, and high student engagement ranking. For more information about the University, visit cedarville.edu.