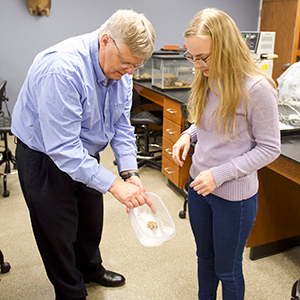 Can frogs help scientists better understand how to delay nerve degeneration? Three professors from Cedarville University’s school of pharmacy and department of science and mathematics are coming together to try to answer that question.

Associate professor of pharmaceutical sciences Dr. Rocco Rotello, professor of zoology Dr. Mike Mendel and associate professor of biology Dr. Robert Paris have been researching freeze-tolerant frogs native to Ohio. These frogs are unique because they completely freeze during winter hibernation. The heart rhythm is undetectable and ice forms in their body cavities.

“That should be a death sentence,” Paris noted.

“This is also a teaching tool where students can participate. It’s not just something they read about, but they actually get to carry out the steps of an experiment.”

Yet the frogs survive.

Rotello has a background in studying apoptosis, a type of programmed cell death, and he’s trying to understand why these cells don’t die. He’s hoping to find one or more non-freeze-tolerant proteins in the frogs that are also present in the human brain in order to either prevent or slow excessive cell death in people with Alzheimer’s and other neurological diseases. This finding could also help doctors more easily track the progression of nerve degeneration in the brain.

Rotello comes to this study having done plenty of work in the area of cell death, including in his doctoral and postdoctoral research.

“Part of my background has been understanding normal cell death that occurs in most living organisms, whether that’s during embryonic development or just cell renewal in the body,” Rotello said.

A couple of Rotello’s students have been involved in the research process. Second-year pharmacy student Victor Letsa from Ho, Ghana, and 2020 graduate Levi Fox were involved in handling and analyzing the cell tissue, DNA, and proteins.

Students from Mendel’s and Paris’ classes were involved as well, including 2020 graduates Ben Dunning, Makayla Gwinn, Michael McCain, Jordan Oldham, and Allison Wise. They caught the frogs in the Greene County area last spring, the season when the frogs call out to one another with a loud chorus. These students went out after dark to catch the frogs and then classified them by species and sex. Other students from these classes have helped maintain the frogs and their food supply, including current Bachelor of Science in biology students Carson Gehman, a senior from Hot Springs, South Dakota; Kristina Newell, a junior from Nazareth, Pennsylvania; Thomas Eagle, a junior from Galloway, Ohio; and Sawyer Williams, a junior from Mazomanie, Wisconsin.

“This is also a teaching tool where students can participate,” Paris said. “It’s not just something they read about, but they actually get to carry out the steps of an experiment.”

The researchers cared for the frogs throughout the year, and then in January they used a sophisticated temperature- and humidity-controlled incubator to simulate the conditions of freezing and thawing. They compared the cells and frogs in various stages of freezing and thawing to find what makes freeze-tolerant frogs so unique.

Mendel and Paris noted that a better understanding of cell death would be useful beyond neurological diseases. For instance, researchers may be better able to kill targeted cancer cells, protect crops during cold snaps or respond to frostbite.

Mendel and Paris added that Dr. Thomas Mach, vice president for academics, arranged funding for the incubator from his office, the department of science and mathematics, and the school of pharmacy.

Rotello notes early results are intriguing regarding the central control protein known as phosphorylated Akt and vascular endothelial tyrosine phosphatases. The group hopes to have a more detailed analysis and confirmed results by the end of the semester.

Located in southwest Ohio, Cedarville University is an accredited, Christ-centered, Baptist institution with an enrollment of 4,715 undergraduate, graduate, and online students in more than 150 areas of study. Founded in 1887, Cedarville is one of the largest private universities in Ohio, recognized nationally for its authentic Christian community, rigorous academic programs, including the Bachelor of Science in biology program, strong graduation and retention rates, accredited professional and health science offerings, and high student engagement ranking. For more information about the University, visit cedarville.edu.