Send Me: Adopted Student on Mission to Birth Country 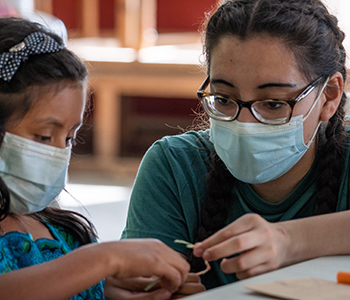 Eighteen years after her adoption from Guatemala, sophomore international studies major Jewell Strock returned to her birth country on a mission trip with Cedarville’s Global Outreach program. Not only did she connect with her past, but she has also found her future.

In 2002, Dario and Jewell Strock were born one day apart in a Guatemalan hospital. The Strock family from Wadsworth, Ohio, decided to adopt both children, and they began the nine-month process of bringing their son and daughter home.

For years, Strock and her family wanted to return to Guatemala. In 2019, the summer before her senior year of high school, the Strocks joined a group of other parents and adoptive children for a week-long trip.

“It is difficult to describe the feeling of knowing that you were chosen for someone’s family, while also wrestling with the traditional expectations for family and mothers.” 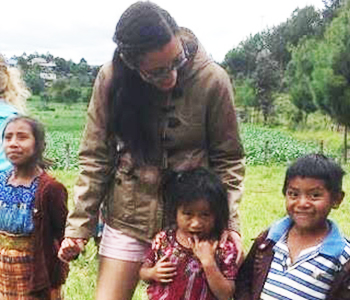 They partnered with Advancing Local Government through Empowerment and Action (ALDEA), which works in Mayan villages to provide education and advocacy, and Suffer the Children (STC) Guatemala, an organization that focusses on providing food and creating jobs in indigenous Guatemalan villages.

For years prior to the trip, Strock was committed to pursuing criminal justice. Her participation in Wadsworth’s local Explorers program, a high school organization for students interested in law enforcement as a career, had spurred her interest in police work. It was not until meeting with a young girl named Cindy while on her trip to Guatemala that Strock felt the pull to missions.

“Cindy told me that she wanted to become a police officer,” said Strock, “so I gave her some of my things from Explorers like stickers and patches. I was struck by the fact that these people have nothing and yet they are so content.”

“When I am in the States, I am not white, but when I am in Guatemala, I am American. These past few years with everything surrounding race and immigration and what it means to be an American has really led me to think about where I belong.”

Leaving Guatemala for the first time radically shifted the course of Strock’s life. After being accepted to Cedarville, Strock changed her major to international studies with a minor in missions to pursue nonprofit work in Guatemala.

Yet, over the course of a difficult first year, Strock questioned her decision.

“I was desperate to go back to Guatemala, to confirm my call to missions and to know if I was pursuing the path God called me to.”

When Cedarville’s global outreach team offered a summer trip with AMG International, Strock jumped at the chance. Her second experience in Guatemala was not what Strock anticipated.

“I struggled to find my place on the team. Everyone seemed to fit a slot--photography, childcare--I just did not know where I belonged.” said Strock. “But over the week, I found that I love the behind-the-scenes work. I love cleaning and cooking and serving people through basic needs.”

While Strock originally thought of missions as a relational job, her calling to relief services came out of witnessing an actual need in Guatemala.

“I believe that as Jesus called us to serve others through actions, my hope to provide basic necessities to people through nonprofits can open the door for relationships and evangelism.”

The Global Outreach trip was especially emotional for Strock as it fell on “gotcha day” (when she and her brother Dario were officially adopted) and Mother's Day.

“For my family, those two days are bittersweet,” Strock said. “It is difficult to describe the feeling of knowing that you were chosen for someone’s family, while also wrestling with the traditional expectations for family and mothers.”

Struggling with identity is a familiar battle for Strock. “When I am in the States, I am not white, but when I am in Guatemala, I am American. These past few years with everything surrounding race and immigration and what it means to be an American has really led me to think about where I belong.”

Strock reminisced about other experiences in which she thought about her identity. “When I was younger, I had the blonde McKenna American Girl doll. A family friend gave me a traditional Guatemalan dress for her- I just had little reminders of Guatemalan culture while all of my memories are my of my living in the United States.”

Even Strock’s name is an ode to her two homes. “My parents had to name us while we were still in the hospital, so that they could put a name to put on the birth certificate,” said Strock. “Jewell was my mother’s maiden name. They chose my middle name, Isabella, because it is more traditionally Guatemalan.”

Yet, over the past few years, Strock has learned to find her identity in God’s call for her life. “I have been learning more and more about the Gospel these past few years, and just really learning to actually rely on God.”

Whether she is in Guatemala or American, Jewell’s complex identity is always centered on her relationship with God. And now she has a purpose that encompasses all of who she is.

Located in southwest Ohio, Cedarville University is an accredited, Christ-centered, Baptist institution with an enrollment of 4,715 undergraduate, graduate, and online students in more than 150 areas of study. Founded in 1887, Cedarville is one of the largest private universities in Ohio, recognized nationally for its authentic Christian community, rigorous academic programs, including the Bachelor of the Arts in International Studies program, strong graduation, and retention rates, accredited professional and health science offerings, and high student engagement ranking. For more information about the University, visit cedarville.edu.