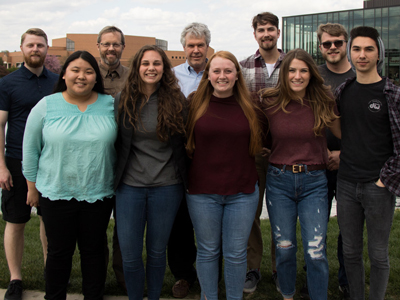 Cedarville University will compete in the 2021 Solar Splash June 8-13 at Champions Park Lake in Springfield, Ohio. Solar Splash brings teams of college engineering students to the Ohio lake to test their knowledge and skill in solar-powered boat performance.

The Solar Splash competition has taken place for the past 25 years, and Cedarville University is the most decorated program in the history of the event. Cedarville won its first competition in 2004, and since that win, has claimed a total of 12 championships.

Joining Cedarville in the 2021 event are engineering students from the University of Puerto Rico at Mayaguez, University at Buffalo, University of Southern Indiana, University of New Mexico, and Cornell University. The list is shorter than usual due to COVID; in the past, Solar Splash has had international teams from England, Turkey, and Japan.

They have to work hard to be efficient — to make the boat as light as it can be — because the constraints are so tight.” 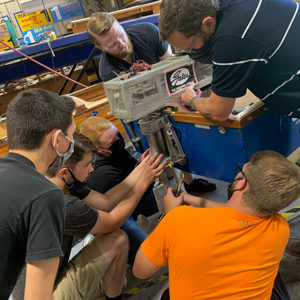 Cedarville engineering students are given the choice to participate in their senior capstone project. Last year, the solar boat competition was canceled due to COVID-19, so this year’s team is especially grateful for the opportunity to compete.

“The 2020-2021 team picked up where previous teams left off,” said Gray, a mechanical engineering major who will work at the National Air and Space Intelligence Center at Wright Patterson Air Force Base after graduation. The 2020 team designed many new features of the boat but was unable to incorporate them due to the COVID-shortened school year.  The 2021 team has been tasked with reviewing these designs, manufacturing components, and integrating the new concepts.

The Cedarville solar boat team creates many of the parts themselves. This year, they are installing new motors and motor controllers. They are also manufacturing and testing a universal drivetrain that will be used for the Sprint and Endurance races to significantly improve performance by having improved efficiency and reducing weight in the boat.   Furthermore, the team will save time between races by using a single drivetrain.

The main events of the competition are the Slalom race, which tests the speed of the boat, the Sprint race covering 330 meters, and Endurance, which lasts for two hours. Teams also earn points based on other categories, such as workmanship and maneuverability.

“In order to win, your team has to do well in every category,” said Dr. Timothy Dewhurst, senior professor of mechanical engineering and advisor to the solar boat team. “The thing about solar boating is that it is very low power. That’s what makes the competition such a valuable learning opportunity for engineering students. They have to work hard to be efficient — to make the boat as light as it can be — because the constraints are so tight.”

“I have learned a lot more about software in general and how to integrate many parts of a project to get it working as a whole,” said Linville, an electrical engineering major who will also work at Wright Patterson Air Force Base after graduation. She has worked on all the controls and the user interface for the boat this year and developed a new app that allows the team to see and test race data. “This past year has brought about so many technical changes and challenges, but the boat will be better because of it.”

Located in southwest Ohio, Cedarville University is an accredited, Christ-centered, Baptist institution with an enrollment of 4,550 undergraduate, graduate, and online students in more than 150 areas of study. Founded in 1887, Cedarville is one of the largest private universities in Ohio, recognized nationally for its authentic Christian community, rigorous academic programs, including its Bachelor of Science in Mechanical Engineering  program, strong graduation and retention rates, accredited professional and health science offerings and high student engagement ranking. For more information about the University, visit www.cedarville.edu.