This Cart Has a Mind of its Own 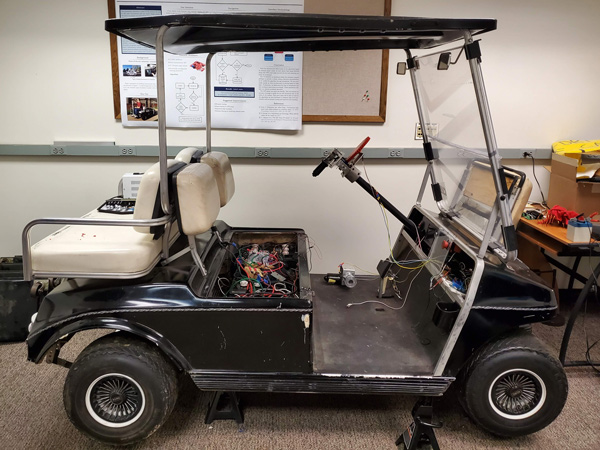 A group of Cedarville University students and professors continued work on a project this spring, which began in 2018 as a way to allow passengers to kick back, relax, and enjoy the drive.

Engineering students will continue the project this fall.

Students were split into two groups, with the software team headed by Fredette and the hardware team headed by Shortt. Fredette’s team, made up of computer engineering students, was tasked with developing the correct code for the project; Shortt’s team was focused on developing the hardware to support the eventual electrical integration of the code.

"You see something in class, design something based on it, and then it works. That’s very satisfying.”

“Our goal is that both golf carts would be working and demonstrable and that we could produce something that student tour guides could take campus tours on,” Fredette said. “Or that Cedarville postal services could use to pick up and deliver packages.”

The project began in 2018 when engineering students in their capstone senior design course approached Fredette about an autonomous transportation project. Fredette, whose doctoral research focused on intelligent transportation, was excited to help.

“With that first group of students, they wanted to work on something closer to outdoor, real-person intelligent transportation rather than smaller, indoor robots,” Fredette noted.

For spacial, financial, and safety reasons, the team decided to work with an electric golf cart as its vehicle, and the engineering department provided enough funding to purchase one from Craigslist.

The project expanded when Cedarville president Dr. Thomas White took interest in the team’s work. He purchased and donated a second golf cart and a LIDAR sensor. This allowed for the addition of Shortt’s team, which used the first cart as a developmental prototype, and the narrowing of Fredette’s team, which focused primarily on software.

“The first cart became a project where we can cut holes, beat it up and patch it up just to make sure it functions,” Shortt shared. “Then we’ll have a game plan for the second car, which can be the ‘pretty version,’ since we’ll already know the modifications needed before integrating the autonomous software Dr. Fredette’s team is working on.”

During the 2020-21 academic year, Fredette’s team has completed testing that began the previous year, as well as added significant functionality through their work with GPS points and LIDAR sensor data. They have also successfully demonstrated autonomous waypoint following and basic obstacle detection.

Shortt’s team is creating the necessary hardware on the cart bodies to support that software.

“We’re not the first people ever making an autonomous shuttle that works, but the product we create is these students who have significant experience in autonomous transportation systems, and there’s great value in that,” Fredette shared.

Located in southwest Ohio, Cedarville University is an accredited, Christ-centered, Baptist institution with an enrollment of 4,550 undergraduate, graduate, and online students in more than 150 areas of study. Founded in 1887, Cedarville is recognized nationally for its authentic Christian community, rigorous academic programs, including its Bachelor of Science in Computer Engineering and Bachelor of Science in Electrical Engineering programs, strong graduation and retention rates, accredited professional and health science offerings, and high student engagement ranking. For more information about the University, visit www.cedarville.edu.