For Cedarville University sophomore Elizabeth Kollmar, her passion for making films always seemed like an unattainable career. But, after a class project led to an award ceremony, the dream no longer seems out of reach. 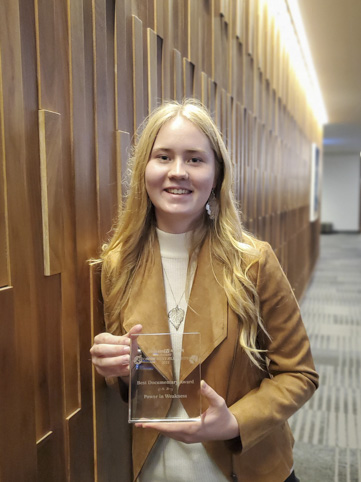 Kollmar, a broadcasting, digital media and journalism major, took a video technology class in her first year at Cedarville. For her final project, she had to create a documentary or short film.

Kollmar’s award for Best Documentary was announced Friday, Nov. 4, at the International Conference on Missions (ICOM) in Columbus, Ohio. The contest is hosted by Good News Productions International (GNPI) and Redeem TV.

“At the time, I was in a discipleship group studying Hebrews in the New Testament. A girl in my group had this wonderful testimony, and I wanted to tell her story," said Kollmar.

“The work of making a film is much more than people would expect,” said Kollmar. “Getting all of the little details to work together to tell a cohesive story, shaping an interview, is so labor intensive but so rewarding.”

After turning in her project, Sean O’Conner, assistant professor of broadcasting, digital media and journalism, recommended that Kollmar submit her documentary to a film contest.

“It was exciting to win because film is something I have wanted to do forever,” said Kollmar. “To win an award is like a payoff for all of the hard work. Even though making the film and having people enjoy it is a reward in itself, knowing that this will keep the impact of the film going is exciting.”

The short documentary tells the story of a friend of Kollmar’s, who, after being diagnosed with Turner’s syndrome, struggled with depression.

“Her testimony was really impactful to me. It wasn’t about whether she was struggling or thriving that determined her faith, but how she learned to trust in God throughout the times of struggle. This film has given me the chance to share the gospel with others, and I hope that its story can continue to impact others.”

For Kollmar, creating God-honoring entertainment has always been a passion.

“I grew up in a family that loved movies, but as I grew older, many great stories were ruined by bad content,” said Kollmar. “I want to create God-glorifying and entertaining films.”

Kollmar grew up in a home that nurtured this passion, learning about photography from her grandfather and making a YouTube channel with her mom during COVID that taught people how to sew masks.

“One of the videos I made with my mom had over 1.5 million views,” said Kollmar. “I realized through that project how time-consuming making videos is, but the payoff at the end is completely worth it!”

Elizabeth’s documentary, entitled Power in Weakness, can be streamed for free through RedeemTV.

Located in southwest Ohio, Cedarville University is an accredited, Christ-centered, Baptist institution with an enrollment of 5,082 undergraduate, graduate, and online students in more than 150 areas of study. Founded in 1887, Cedarville is one of the largest private universities in Ohio, recognized nationally for its authentic Christian community, rigorous academic programs, including the bachelors in broadcasting, digital media, and journalism, strong graduation, and retention rates, accredited professional and health science offerings, and high student engagement ranking. For more information about the University, visit cedarville.edu.