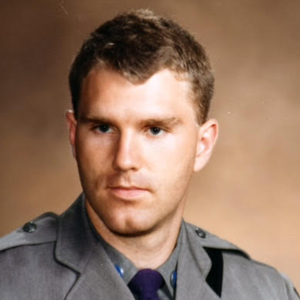 Psalm 106:3 is a verse that Steve Meacham, associate professor of criminal justice, lives by. He often recites it to himself.

“The Psalm tells us, ‘Blessed are those who act justly, who constantly do what is right,’” Meacham noted. “God detests injustice, so we should too.”

This love of justice is what led Meacham to a dedicated 31-year career with the New York State Police (NYSP) and, eventually, to teaching criminal justice at Cedarville University.

“I thought that perhaps I could have a bit of an impact at a Christian college by teaching students who were to be in the field,” Meacham explained. “Fortitude, courage, integrity — these are all attributes that are central to the Christian faith, and they are also critical to a profession in criminal justice.”

"I’m loving using my experiences to train future criminal justice professionals who will be used by God for justice.”

Long before arriving at Cedarville in 2019, though, Meacham walked through more than three decades of public service with the NYSP, gaining experience and wisdom that he now shares in the classroom.

“When I was a teenager, I saw a New York state trooper and thought, ‘That looks like an awesome job,’ so I began to look into the profession,” he explained. “Early on, I had an interest working for the NYSP, and when I learned that it was the premier law enforcement agency in the state, I was interested in the challenge.”

As an undergraduate student, Meacham spent one semester at Cedarville University to play soccer before transferring to a local community college near his hometown in New York to obtain his associate’s degree in criminal justice. He then went on to earn his bachelor's degree in psychology from the State University of New York (SUNY) at Albany.

Upon graduating, Meacham took the New York State Police exam alongside 25,000 other applicants, and he scored high enough to be among the 200 accepted into the academy.

“By God’s grace, I was able to get through the academy — not all do — and become a New York state trooper one year out of college,” Meacham said.

“I began as a trooper, like everyone does in the NYSP. Early in my career I was given the additional role of a field training officer,” he explained. “I was later able to mentor and teach several young troopers, which was rewarding.”

Meacham was selected to the Bureau of Criminal Investigation (BCI) 12 years into his career with the NYSP, focusing on the investigation of the most serious felony crimes. Years later, after investigating thousands of criminal cases, he was selected for the FBI school of hostage negotiation because of his investigative experience, calm demeanor and ability to diffuse volatile situations.

“As a hostage negotiator, there would be times when a call would come in about a situation, and I’d tell my wife, ‘I might be late for dinner because there’s a hostage situation I have to handle,’” he shared. “But then, right as I’d arrive on the scene, the suspect would surrender. When I’d come home to my wife, she wouldn’t be surprised at all — just tell me she’d been praying.”

Another aspect of Meacham’s NYSP career was teaching at the State Police Academy where he taught troopers and seasoned investigators about the finer points of criminal investigation.

After being promoted to Senior Investigator in the Bureau of Criminal Investigation, Meacham supervised criminal investigations which enabled him to have a more regular schedule.

“It was at this time that SUNY Adirondack approached me and asked me to teach a criminal justice course in the evening,” Meacham noted. “At this point, I had about 28 years on the job, and I was interested in the challenge.”

Prior to teaching his first college courses, Meacham had obtained his master’s degree in criminal justice while working for the NYSP. Each year, the department would select two investigators from across the state and fund their graduate degree if they were accepted to SUNY Albany’s school of criminal justice. Meacham was one of the two chosen.

“I didn’t realize it, but SUNY Albany’s criminal justice graduate program was ranked second in country at the time,” Meacham shared. “I was fortunate to be accepted to the NYSP program and to SUNY. I see now how God used that time to prepare me for my life post-NYSP. That program is one of the reasons I’m at Cedarville today.”

After three years of teaching night classes as an adjunct professor, SUNY Adirondack asked Meacham to teach two additional criminal justice classes during the day, which would conflict with his police work. After talking with his wife and considering his love for teaching, Meacham decided it was time to retire as a senior investigator with NYSP BCI to pursue a professorship.

“After researching various Christian colleges, I noticed Cedarville was looking for a criminal justice professor. I prayed about this potential opportunity and then called,” he said. “Dr. [Mark Caleb] Smith answered, and when I explained to him my experience, my faith and my desire to teach at Cedarville, he told me to apply.”

“It was difficult to leave our deep roots in New York, but my wife and I could see that God was calling us to Ohio for a purpose,” Meacham added. “We have a new chapter here, and I’m loving using my experiences to train future criminal justice professionals who will be used by God for justice.”

Located in southwest Ohio, Cedarville University is an accredited, Christ-centered, Baptist institution with an enrollment of 4,715 undergraduate, graduate, and online students in more than 150 areas of study. Founded in 1887, Cedarville is one of the largest private universities in Ohio, recognized nationally for its authentic Christian community, rigorous academic programs, including the Bachelor of Arts in Criminal Justice program, strong graduation, and retention rates, accredited professional and health science offerings, and high student engagement ranking. For more information about the University, visit cedarville.edu.