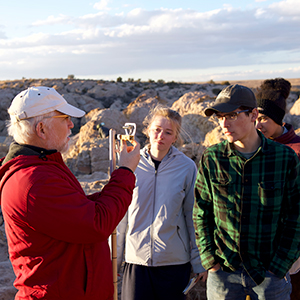 Cedarville University senior professor of geology John Whitmore thinks that the Grand Canyon “rocks” — pun intended. After a January trip to the canyon with students, he is only more convinced of its wonder.

Backpacking throughout the trip January 2-9, the group hiked the Grandview, Hance Creek and Tonto trails to immerse themselves in the canyon study experience. Whitmore last hiked those trails in 1985 as a new graduate student.

“We studied the different layers of rocks, their characteristics, canyon formation, different kinds of sedimentary processes and fossils,” Whitmore explained.

“The canyon is the best classroom in the world."

“Backpacking was ideal because as we came upon different rock exposures, we could discuss what was directly in front of us in that exact moment.”

A geologist who affirms a literal six-day creation and young earth, Whitmore infuses his research trips with key insights he’s learned over decades of studying Noah’s Flood and its influence on forming the varied rock layers in the Grand Canyon.

Whitmore’s expertise is in the Coconino Sandstone, a rock that many scientists believe to have been formed in desert-like terrains hundreds of millions of years ago. Whitmore’s research, however, reveals characteristics of the rock that point to its likely formation in an aqueous setting consistent with the Noahic Flood.

Additional rock exposures that Whitmore and his group studied over the January trip included the Redwall Limestone and the Tapeats Sandstone, both of which they were able to observe during their multi-day backpacking journey into the canyon.

“The canyon is the best classroom in the world,” Whitmore said. “I try to take pictures and videos and take them back to the classroom, but there is nothing like being right there. It sticks with you.”

Following the backpacking portion of their trip, Whitmore and his students traveled east of the canyon to study ideas of Grand Canyon erosion with two staff members from Canyon Ministries of Flagstaff, Arizona. There, the group studied ancient Lake Bidahochi. Whitmore and other creationist geologists theorize that a volcanic eruption in or under the lake could have caused a tsunami, leading to a failure of the lake dam and consequential erosion of the Grand Canyon.

Today, all that’s left of Lake Bidahochi are some lake sediments capped by the volcanic layers of the Hopi Buttes — rock deposits that formed prior to its draining — which are evidence of historic, underwater volcanic activity.

Located in southwest Ohio, Cedarville University is an accredited, Christ-centered, Baptist institution with an enrollment of 4,715 undergraduate, graduate, and online students in more than 150 areas of study. Founded in 1887, Cedarville is one of the largest private universities in Ohio, recognized nationally for its authentic Christian community, rigorous academic programs, including the Bachelor of Science in Geology program, strong graduation, and retention rates, accredited professional and health science offerings, and high student engagement ranking. For more information about the University, visitcedarville.edu.