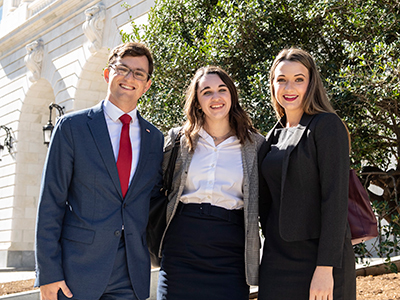 Showers, a junior political science major at Cedarville University from Hammon, Oklahoma, spent the fall semester living, working, and learning just down the street from the United States Capitol. Along with 14 Cedarville students accepted to the D.C. Semester, Showers was earning her public policy minor while gaining valuable internship experience.

But for Showers, her internship unexpectedly shifted into a full-time opportunity as a staff assistant in the office of U.S. Sen. James Lankford, senator from Oklahoma.

“Getting a job on the Hill is very selective. Only about 60 positions are open in the senate side at any given moment."

Showers applied to Cedarville specifically for the D.C. Semester program. After her eventual acceptance into the program, Showers then began the stressful process of searching and applying for internship opportunities. “I applied to about 15 places and got rejected by approximately 90%,“ she shared.

In the end, she joined the staff of Sen. Lankford, just as she desired.

“I really respected Sen. Lankford and had wanted to work for him since summer of 2018 – before I even wanted to go to Cedarville,” Showers explained.

Once on the Hill, Showers adjusted to life as a D.C. intern. Each of her workdays began with a 10-minute walk to the Hart Senate Office Building. On the job, she provided refreshments to visitors, emptied the shredder, answered phone calls, talked with constituents, and recorded their opinions for the senator to eventually read.

However, four weeks into the semester, the office staff assistant took a new job elsewhere, leaving the position vacant and leading to an unexpected promotion for Showers. “Getting a job on the Hill is very selective. Only about 60 positions are open in the senate side at any given moment,” Showers said.

Showers accepted the position that she hopes will help her return to the Hill after her graduation from Cedarville in May 2023. Her new role included holding the keys to the office, taking calls from other senate offices, and representing Sen. Lankford to his Oklahoma constituents through phone calls and emails. Showers also occasionally helped with casework, thoroughly communicating constituents’ personal issues to liaisons between the constituent and federal services.

“I was a mouthpiece for the senator to his constituents, and I felt a lot of responsibility to reflect the senator well.”

With this responsibility came the need for much patience as Showers listened and digested the information from the constituents.

“It can be very emotionally draining, dealing with those who are coming into conversations with an attitude of aggression.” Showers said. “I have learned how to take deep breaths and develop a thick skin, which is very, very important in politics.”

However, these hard-earned skills of learning how to de-escalate conflict also equipped Showers for pursuing an eventual career as an ambassador or a U.S. foreign service officer.

Shower’s life in D.C. has required a transition.

“Living in the city with highly driven people pushed me to know what I'm about. It sometimes felts emotionally distant and hard to be apart from family and friends,” said Showers. “A lot of the stress related to D.C. is the spiritual and mental battle being in the environment where people both within government buildings and camping on the building lawns need the gospel.”

With a full year and a half left of her college experience in front of her, Showers has much to look forward to.  “I came back to Cedarville to contribute as a mentor, who is just another student who is ready to chase the good that Cedarville has to offer. There is much more to learn ahead.”

Showers hopes to one day return to her work and meaningful connections made on the Hill as a launching point for future career opportunities.

Located in southwest Ohio, Cedarville University is an accredited, Christ-centered, Baptist institution with an enrollment of 4,715 undergraduate, graduate, and online students in more than 150 areas of study. Founded in 1887, Cedarville is one of the largest private universities in Ohio, recognized nationally for its authentic Christian community, rigorous academic programs, including the B.A. in political science degree, strong graduation and retention rates, accredited professional and health science offerings, and high student engagement ranking. For more information about the University, visit cedarville.edu.