Mom and Daughter Graduate With MSN Together 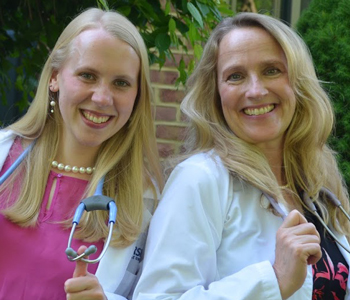 Mother and daughter Valerie and Erika Belmont graduated college, were hired as nurses, and traveled around the world as short-term missionaries to Ghana before deciding to pursue careers as family nurse practitioners — two long and interweaving paths that led them to exactly where they needed to be.

Both from Elizabethtown, Pennsylvania, Valerie and Erika graduated from Cedarville’s Master of Science in Nursing - Family Nurse Practitioner (M.S.N.-FNP) program in May 2020. With 27 years between their undergraduate completion dates, this mother-daughter duo followed unique paths back to the program.

Valerie graduated from Cedarville University in 1990 with her Bachelor of Science in Nursing (B.S.N.) and entered the workforce shortly thereafter.

“I was terrified to re-enter the world of academia and especially online. When I was in college, I used a typewriter. But knowing Erika was doing it alongside me was a tremendous help."

She worked for five years in a small community hospital on both the general floor and medical intensive care unit and then spent 12 months as a traveling nurse.

“I took positions in Maryland, Maine, New York, and other locations before stepping down when I became pregnant,” Valerie shared. “I had six babies, took 15 years to raise them, and then over the last 11 years, reentered the workforce.”

Erika graduated with her B.S.N. in 2017 and began working on a med surgical unit at Penn State Milton S Hershey Medical Center in July that year.

As both women considered their futures in nursing, a short-term mission trip to Ghana in late 2017 provided the motivation and push they needed to go back to school.

“When I went back to work, I knew I didn’t want to stay a bedside nurse for the rest of my life, so I was thinking and praying, ‘What is the next step?’ Valerie said. “Then in Ghana, when the kids learned we were medical care providers, I felt lost because my experience with cardiac catheterization patients didn’t exactly transfer. I knew coming back from that trip that I wanted to be more helpful and educated.”

“I had dreams of going straight to the mission field after high school, but I later recognized the value of furthering my own education,” Erika noted. “While in Ghana before my senior year of nursing school, I realized that furthering my nursing education would provide me with another tool in my toolbox to care for those God placed in my path.”

Once returning from the trip, both women applied and were accepted into Cedarville’s M.S.N.- FNP program, which includes online courses, 600 hours of direct clinical care, and four two-three-day on-campus experiences.

Valeria and Erika are especially thankful for the support and companionship they provided one another during the program.

“I don’t know that I would’ve done this without my mom,” Erika said. “She was influential in me starting and keeping me going. Even though we were both working at different capacities, we were study buddies at times, collaborated when we could, and could process clinical situations together.”

“I was terrified to re-enter the world of academia and especially online. When I was in college, I used a typewriter. But knowing Erika was doing it alongside me was a tremendous help,” Valerie noted.

As they reflect on their experiences in the program, both women are grateful to have received their education in a flexible, affordable and Christ-centered manner.

“Cedarville was influential in helping me see nursing as a ministry,” Erika added. “One of my clinical supervisors always told us, ‘Jesus would give a bed bath,’ and it made me think about how Jesus was willing to care for the physical needs of others. So I can look into patients’ faces and work to understand where their experiences have brought them in their physical and spiritual times of need. Nobody is just a body — everyone is more.”

Located in southwest Ohio, Cedarville University is an accredited, Christ-centered, Baptist institution with an enrollment of 4,550 undergraduate, graduate and online students in more than 150 areas of study. Founded in 1887, Cedarville is one of the largest private universities in Ohio, recognized nationally for its authentic Christian community, rigorous academic programs, including the Master of Science in Nursing - Family Nurse Practitioner (M.S.N-FNP) program, strong graduation and retention rates, accredited professional and health science offerings, and high student engagement ranking. For more information about the University, visit www.cedarville.edu.