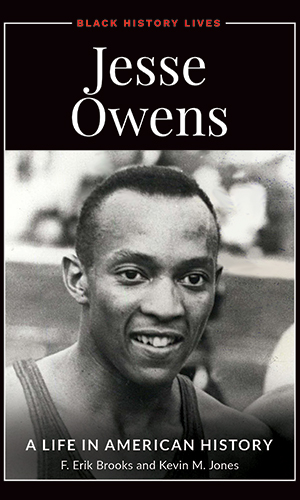 One Cedarville University professor has a new publication on the market, and he hopes it’s on the fast-track to success.

Dr. Kevin Jones, assistant professor of education and dean of the school of education, recently co-authored with F. Erik Brooks a biographical book on the famous American track and field athlete Jesse Owens. Owens won four gold medals at the 1936 Summer Olympics in Berlin, infuriating Adolph Hitler who wanted the games to serve as a platform for German ethnic superiority.

Jones’ undergraduate and graduate experiences heavily shaped his vision of the book.

“I went to a historically black college and university — Kentucky State University — where studying African-American athletes, activists, political figures and pastors was a part of our rhythm,” Jones explained. “Jesse was a figure we frequently discussed, and I realized the greater context of his life when I went on the March of Remembrance and Hope bus tour in 2006.”

The bus tour, which visited 13 European cities, was a key feature of a year-long study-abroad program that allowed Jones to study in greater depth the Holocaust and the Nazi party.

“Jesse Owens put to death what Adolf Hitler was saying about Germans being the mighty race — about it being impossible for any minority ethnic group to outperform Germany."

“Jesse Owens put to death what Adolf Hitler was saying about Germans being the mighty race — about it being impossible for any minority ethnic group to outperform Germany,” Jones explained. “In the 1936 Olympics, Owens’ success silenced racist rhetoric and racist people.”

“And still, this young man from Danville, Alabama, literally outran the world while everyone was watching,” Jones added. “He gave people a chance to say that Hitler was wrong.”

In addition to exploring the historical landscape of Owens’ career, Jones and Brooks also consider Owens’ faith, its impact on his life, and lessons modern readers can derive from his story.

“We see that Jesse ran races for crowns that are perishable,” Jones said. “He won multiple gold medals, all of which will tarnish. But what we see in the time, energy, effort, and dedication he put into his sport is an image of the Christian walk and life. As Christians, we don’t run for a perishable crown but for an imperishable one.”

“Jesse Owens: A Life in American History” is now available through Amazon, Barnes and Noble, and several other retailers.

“This is a book for people thinking about history, but it’s also a biography on a prolific African-American athlete for those interested in thinking through Jesse’s impact on the Holocaust and race as well as his legacy,” Jones said.

Located in southwest Ohio, Cedarville University is an accredited, Christ-centered, Baptist institution with an enrollment of 4,715 undergraduate, graduate, and online students in more than 150 areas of study. Founded in 1887, Cedarville is one of the largest private universities in Ohio, recognized nationally for its authentic Christian community, rigorous academic programs, including the Bachelor of Arts in Social Studies Education, strong graduation, and retention rates, accredited professional and health science offerings, and high student engagement ranking. For more information about the University, visit cedarville.edu.