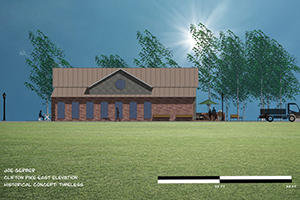 It started with some longtime local residents and a simple vision: beautify the village of Cedarville. Since March 2021, members of the Cedarville Revitalization Project have painted curbs, finished building-side stonework, cut brush and pulled weeds, and even commissioned a mural.

“Students developed ideas and proposals to spark the imagination and creativity of the village team.”

The design students recently completed a four-week class module at the International Center for Creativity (ICC) in Columbus that focused on exterior space design, with Cedarville as their client.

“Our hope was to create a meaningful academic and creativity exercise that honored the parameters of Cedarville’s project,” Jim Stevenson, ICC president, said. “Students developed ideas and proposals to spark the imagination and creativity of the village team.”

Eight teams of four to five ICC students put together design proposals for four targeted village areas: the bike path on the south end of the village, an abandoned building and lot alongside Clifton Pike, a number of rental properties in the southern portion of downtown and the 15-foot-wide vacant traffic lane between Beans-n-Cream and Orion Coffee and Tea.

Some teams additionally included proposals for the Cedarville Opera House, the two parking lots behind the U.S. Bank branch, and the entire Rt. 72 and 42 corner of Beans-n-Cream.

“We created designs off of two architectural concepts,” Joe Gerber, a senior IID major from Ellendale, Delaware, said. “The historic concept worked heavily with existing structures — adding a new flavor to Cedarville without major changes — whereas the open concept allowed us to have more liberty and propose something new.”

Proposals were submitted to Cedarville committee members in eight 10-minute videos — one from each team — explaining their research and approach for their historic and open designs.

“Knowing that the Cedarville committee will have their eyes on our work has added an intentionality to our designs,” Gerber added. “If anything we propose causes the client to say, ‘That’s really inspiring; let’s do this in a different way,’ then our goal is accomplished. We’ve generated something to help bring about the final solution.”

Some existing proposals include integrating the bike path to the Cedarville Community Park and extending it to allow bike traffic from Xenia, resurrecting the Clifton Pike lot as a community garden, placing a pickleball court in one of the existing abandoned lots, and eliminating the car lane between Beans-n-Cream and Orion Coffee and Tea.

“We have the advantage of understanding Cedarville, its clientele, and its industries,” Gerber noted. “It lets us better serve and empathize with our client.”

Though completing proposals for their exterior space design class module mid-November, those same ICC students are now enrolled in interior space design, allowing them to extend their proposals to building interiors. This module will conclude on Dec. 9, and ICC instructors are planning to invite a Cedarville committee representative to watch student presentations for these internal design components.

“The most satisfying thing a designer can experience is someday utilizing or seeing someone else utilize a space that you designed,” Gerber said. “It would be spectacular to walk through a space in Cedarville that was generated by one of our minds.”

The ICC is a Columbus, Ohio-based firm that delivers "creativity" consultation for companies, artists, and individuals and partners with Cedarville University to deliver a cutting-edge IID major.

Located in southwest Ohio, Cedarville University is an accredited, Christ-centered, Baptist institution with an enrollment of 4,715 undergraduate, graduate, and online students in more than 150 areas of study. Founded in 1887, Cedarville is one of the largest private universities in Ohio, recognized nationally for its authentic Christian community, rigorous academic programs, including the Bachelor of Arts in Industrial and Innovative Design program, strong graduation, and retention rates, accredited professional and health science offerings, and high student engagement ranking. For more information about the University, visit cedarville.edu.