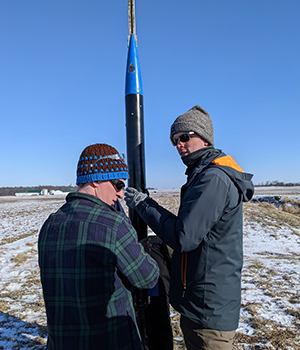 A team of Cedarville University students has worked for months designing and testing a rocket that will be used for the 2022 NASA Student Launch competition on April 20-23 in Huntsville, Alabama.

In one of its final tests before the competition, the students will take their NASA dreams even higher when they launch a full-scale prototype rocket. The team of engineering and computer science students has already recorded three successful subscale rocket launches, two in December and one in January. Testing the full-scale rocket will be their final step before entering the competition.

As with the previous launches, the full-scale prototype of their “Forerunner” rocket is set to lift off from the Wright Stuff Rocketeers’ Launch Site at 5995 Federal Road in Cedarville, Tuesday, March 1 at a site that was approved by the Federal Aviation Administration (FAA). The specific launch date may change depending on the weather and when building materials arrive.

The team of engineering and computer science students has already recorded three successful subscale rocket launches, two in December and one in January.

The data from the full-scale launch will be a crucial component of the flight readiness review, which the team must submit to NASA by Monday, March 7. Team members will also need to complete STEM (science, technology, engineering, and mathematics) engagement activities with members of the public by that date.

Team members will then complete the rocket’s payload system, used to track its location and land in a designated area, and the rocket’s airbrakes.

This is the first year Cedarville’s team has participated in the NASA Student Launch competition, which challenges university students across the country to design, build and successfully launch rockets while also promoting STEM education in the communities where their schools are located.