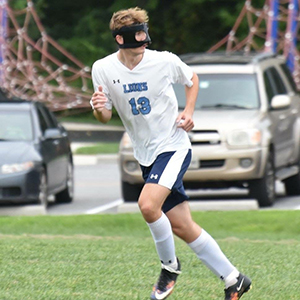 When Cedarville University senior William Brethauer was a junior in high school, he never could have anticipated that a broken nose would lead to a lifelong passion, one which eventually led to an Olympics-sized business success.

Brethauer, a broadcasting, digital media, and journalism major from Sykesville, Maryland, is the sole proprietor of Mask Productions, a photography and videography business that has already connected him with some of the biggest names in USA Swimming, including gold medalists Ryan Murphy, Caeleb Dressel, and Katie Ledecky.

In high school, Brethauer participated in multiple sports: soccer, basketball, and baseball. But, in his junior year during an intense soccer match, Brethauer went in for a header and broke his nose.

"God used a broken nose to lead me to photography and used that to give me a passion for missions. He used my love of sports to lead me to the Olympic trials.”

Not only did Brethauer have to sit out his soccer season for six weeks, but he was not able to participate in events at his three-day high school retreat.

"I was trying not to have a terrible attitude, but I was focusing on all of the negatives,” said Brethauer. “During that time, I could only think of all of the things I was missing, but now looking back I am thankful for that time. God used my broken nose to show me what I want to do in life.”

“I went on a trip to Costa Rica with my school, and it was truly eye-opening,” said Brethauer. “Through that trip, I realized that there were amazing stories that I wanted to tell. Missions teams will come home with a PowerPoint, but it never fully conveys how impactful missions trips are. I realized I wanted to document missions, not only for people in churches but as a way of sharing the gospel with others at home.”

As a result, Brethauer started Mask Productions, a company that offers a wide array of videography and photography bookings, with a special emphasis on missions and sports photography.

“I named it Mask Productions because of the face mask I had to wear while my nose was healing,” said Brethauer. “I wanted the name to be a conversation starter so that I can tell the story of God using a seemingly random event to show me a passion I never knew I had. It was really through that experience that I had to say, ‘OK, God, I trust you with whatever happens in my life.’”

Through Mask Productions, Brethauer has worked with numerous sports missions organizations, including COSDECOL, a soccer ministry in Colombia, and Athletes in Action, a sports ministry run by CRU and located in Xenia, Ohio. While Brethauer’s passion was sports ministry, he realized that to finance his trips, he would need to expand to professional sports photography as well.

In December 2019, Brethauer was looking for a summer job. His original plans to work with a professional surfer in Hawaii were wiped out by COVID.

“I was disappointed to not have the opportunity and not sure where I was going to work," said Brethauer. “My aunt and uncle in Colorado got me in touch with the communications director for USA Swimming. I ended up getting to work with the USA swim team during Olympic trials and their summer training camp. Even more random, their training camp ended up being in Oahu, Hawaii.”

Brethauer was able to travel with the USA Olympic swim team to Hawaii for their summer training camp before the 2020 Tokyo Olympics, where he frequently walked the pool deck with Ryan Murphy, Caeleb Dressel, and Katie Ledecky.

“Katie [Ledecky] and I actually talked,” said Brethauer. “We grew up in the same area so we would talk by the snack table between training. A lot of the footage was supposed to be fun, getting to know the athletes, so watching the Tokyo Olympics was so stressful because I really felt like rooting for my friends.”

Brethauer’s amazing opportunity was just another confirmation of God’s plan for his life.

“Every experience and opportunity I have had has felt so random,” said Brethauer. “God used a broken nose to lead me to photography and used that to give me a passion for missions. He used my love of sports to lead me to the Olympic trials. I have learned to trust his plan. I don’t think I will ever truly plan anything that happens in my life.”

Located in southwest Ohio, Cedarville University is an accredited, Christ-centered, Baptist institution with an enrollment of 4,715 undergraduate, graduate, and online students in more than 150 areas of study. Founded in 1887, Cedarville is one of the largest private universities in Ohio, recognized nationally for its authentic Christian community, rigorous academic programs, including the Bachelor of Arts in broadcasting, digital media, and journalism, strong graduation, and retention rates, accredited professional and health science offerings, and high student engagement ranking. For more information about the University, visit cedarville.edu.